Sri Lankan lynched and burnt in Pak, stated by the autopsy report 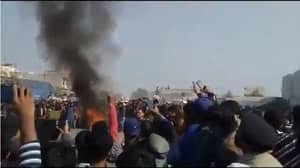 The report identified the skull and jaw as causing the death of Diawadana. As a result of this attack, it has affected his vital organs, the liver, the stomach and one of his kidneys. With the exception of one foot, all parts of his body suffered serious injuries. His spine is also broken by three different points.

Earlier on Friday, supporters of the extremist Islamic group Tehreek-e-Labbaik Pakistan (TLP) attacked the clothing industry and killed the general manager of Rajko Industries Diyawadana and burned his body. Many in the angry mob also clicked on the photos and videos shared on social media also showed other suspects speaking on news channels explaining how they had carried out the killings.

Diyawadana’s body will be sent to Lahore and given to a Sri Lankan ambassador. The body will be flown to Sri Lanka on a special flight after the completion of all official procedures.

The incident has seen widespread criticism from the Pakistani community with many accusing the government of disrespecting the TLP. Residents protested in Karachi, Islamabad and Lahore following the tragic deaths, with many worried that the incident would bring national embarrassment to the nation.

It is also reported that Pakistan previously released 2,000 TLP extremists two months ago.

Therefore, in India implementation of CAA also having the same motive to secure the people of community living in an oppressive nation like Pakistan. The nature of Pakistan is very well exposed to whole world and their is nothing new in this. The people of Pakistan are also depressed with the kind of behavior adopted by government and force in nourishing the anti peace and anti social elements that are terrorists.

The ideology of fanaticism and bigotry is nothing new for the country like Pakistan. The notion prevailing in Pakistan is need to be changed as people need to understand that Humanity should be placed above all kind of extremism. Pakistan government need to innovate about the betterment policies and enhancing status of people.

Ronaldo offers to pay after his $2mn supercar crashes – media