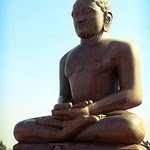 Mahaveer Swami is also known as Vardhamana and was the 24th and last Tirthankara of Jainism. In the 6th century BCE, he was born as a prince Vardhamana to King Siddhartha and Queen Trishala in a royal family of Kshatriyakund, Vaishali (modern-day Bihar). His family was a lay devotee of 23rd Tirthankara Parshvanatha.

Lord Mahavir’s birthday falls on in Chaitra month (Mah) of the 13th day of the rising moon in the Vira Nirvana Samvat. Lord Mahavir was married to Devi Yashoda and had a daughter Priyadarshana. At the early age of 30, he left his worldly possessions, home, clothes to live an ascetic life and became a monk.

Lord Mahavir spent 12 years in deep silence and meditated under the Ashoka tree to attain control over his desires and feelings. It is believed that the Tirthankara’s were human beings only but, through their state of perfection, that is acquired by the intense meditation and self-fulfilment, they become a pure soul.

He was known for attracting people irrespective of their status like wealthy, poor, king, men, and women, touchable and untouchable. He recognizes every person in this world as equal as all belongs to a pure soul.

Through his teachings, he inspired many rulers from different kingdoms like King Chetaka of Vaishali, King Bimbisar, King Ajatshatru, the nine kings of Kashi and Licchavis, and many more were in a queue.

According to the Jain Uttar Purana and Harivamsa Purana, after 12 years of continuous meditation, he achieved his Kevala Jnana (omniscience) that he attained infinite knowledge at the age of 43 under Sala tree on the bank of River Rijubalika near Jrimbhikagrama.

The introduction of the Jain Sangha and reordering the religion was being done by Lord Mahavir. Lord Mahavir was committed to five vows and propagated the message of the following:

Lord Mahavir’s view about the human body is recognized as the adobe of the soul, not by the limbs or structure of the body. He recognized human beings as spiritual souls.

Lord Mahavir was known for attracting people irrespective of their statuses like wealthy, poor, king, men, and women, touchable and untouchable towards the practice of Jainism. He recognizes every person in this world as equal as all belongs to a pure soul.

Lord Mahavir was well known for describing the worship of God as salvation and denounced the worship of God. He was majorly focused on the idea of the supremacy of the human and stressed the importance of the positive and spiritual attitude.

The significance of Diwali in Jainism is very superior as on the same day Lord Mahavir attained his Moksha at the age of 72 in Pavapuri. Lord Mahavir said that his death must be treated as a moment of happiness as he is liberated from the cycle of life. Diwali is also treated as a year ending for Jainism.