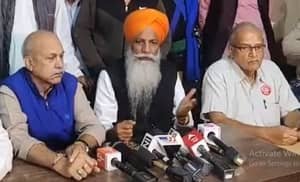 Farmers Unions are likely to call off the year-long protest after the Centre agreed with all the demands of the Farmers Union. Reportedly a committee set up by the SKM is directed to deal with the Centre as the Centre approved to commence talk over other issues too.

Around 32 out of 40 farmers union of Samyukt Kisan Morcha (SKM) agreed to call off the protest. The farmers affirmed the Centre’s behaviour of accepting the demands and commencement of the talks. It is also registered that there might be a split in the farm faction as Rakesh Tikait and some other farm unions disagree with the stand of SKM.

The SKM presented around six demands in front of the Central government after the revocation of three controversial farm laws. The major demands presented by the farm unions includes Guaranteed law on MSP and taking back all the cases against protesting farmers.

The SKM is composed of a five-member committee comprising of prominent farm leaders of the Protest. SKM named Ashok Dhawale, Balbir Singh Rajewal, Gurnam Singh Chaduni, Shiv Kumar ‘kakkaji’ and Yudhvir Singh to be part of the committee that deals with the Centre over pending demands.

The trend might create tension and dismantle the legal system of the nation as if every guilty person start protesting against their sentence and suppressing the government then it became prejudice against the victims and justice system.