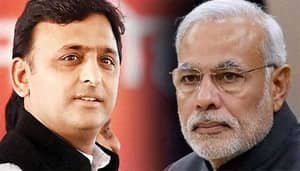 Prime Minister Narendra Modi on Tuesday launched around three major projects, including AIIMS and a major fertilizer centre at Gorakhpur. PM Modi further slammed the Samajwadi Party by taunting red caps (a symbol of the Samajwadi Party) are the red warning for Uttar Pradesh. “The Samajwadi Party (SP) led by Akhilesh Yadav (SP) wants to form the next provincial government to show sympathy for the terrorists,” Modi affirmed.

While addressing a rally at Meerut (UP), Akhilesh Yadav revert to the claims of BJP and called BJP ‘Jhoot ka Phoo’. Along with Rashtriya Lok Dal (RLD) leader Jayant Chaudhary, Akhilesh affirmed about registering a marvellous win in the upcoming 2022 Uttar Pradesh legislative Assembly Elections.

The premier said the SP leadership only cared about power – to fill their coffers, illegally encroach and give freedom to the mafia.

“Today, the UPS is all aware that ‘red caps’ are concerned only with ‘red skies’. They had nothing to do with your pain and problems. “The ‘red caps’ demand power – to fraudulently fill their bags, illegally break-in, and give freedom to the mafia,” PM slammed Samajwadi politics and Akhilesh.

Speaking to opponents about his criticism of the Covid-19 epidemic, Modi said, “These people will never understand that even during the coronavirus crisis, the two-engine government continued to develop. It did not stop working.”

Meanwhile, Modi went on to say that if the work was done in good faith, even when disasters were not a hindrance, he added that the opening of a fertilizer centre and AIIMS in Gorakhpur would send several messages.

“When there is a government that is concerned about the categories of people who are oppressed and disadvantaged, you are working hard and producing results. The program in Gorakhpur today is proof that nothing can happen to the new India once it is decided, ”PM Stated.

Therefore, PM Modi at Gorakhpur launched an attack on the malicious, misrule, and lawlessness of the previous government and discussed the level of corruption. PM reminded the people of UP about the past cruel days and harassment upon the public, where corruption (Mafia Raj) and casteism was superior.