https://ift.tt/Rmsdwrz person was killed and four others...

https://ift.tt/ManuYBd into a recliner in the corner... 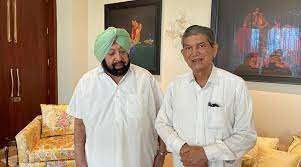 Former Uttarakhand CM Harish Rawat hinted to quit Congress and expressed unhappiness with Congress High Command through his series of tweets. Over the issue, Captain Amarinder Singh takes a dig and said, “You reap what you sow,” and wished him for the future.

In one of his tweets, he found saying that, “a voice from the corner of my heart says I will not run away from the challenges.”

According to the General Secretary of Congress Mathura Joshi, Rawat is a prominent face among the people of Uttarakhand and accounts for 7 to 10 per cent of the vote share on his shoulders. The party is yet to decide the CM for the state but, this election will be very special for Harish Rawat as the voter believes that it will be going to be the last election of Rawat due to his age.

The Congress Sate turmoil has again triggered after Captain Amarinder’s exit from the party. The political thinkers also believe it was the worst phase for Congress and the Nehru-Gandhi family. First, the Congress party is continuously losing its confidence from the public and Secondly, the prominent party leaders and builders of the Congress are leaving it only because of the Nepotistic approach and weak leadership.

The principle of Sanatana Dharma advocates the karma repeats policy. Whatever wrong or right you will do the same you will experience. We can even relate it with Newton’s third law of motion that states that “For every action, there is an equal and opposite reaction.”

Therefore, the Congress party need to alienate all the disparities and deformities existing within the party like the Gehlot-Pilot conflict, Dev-Baghel conflict and newly raised Rawat’s unhappiness and many other. With this behaviour, Congress might lose its last three state’s in hand that are Chhattisgarh, Rajasthan and Punjab. Punjab will undergo elections next year whereas Rajasthan and Chhattisgarh elections are scheduled in 2023.