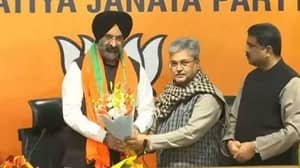 Union Minister Dharmendra Pradhan today said Sirsa had met with HM Shah and BJP chief JP Nadda before being inducted into the BJP. “Sirsa has been working with us for a long time. Sirsa has so far been the head of the DSGMC, but has resigned from it. Sirsa has met with Amit Shah and JP Nadda just before joining,” he said.

Welcoming Sirsa to the BJP, Shekhawat said the saffron party would benefit from the Punjab election with its inclusion.

Following his advent into the party, Sirsa thanked the BJP leadership and said he had worked with the Delhi Sikh Gurdwara Management Committee (DSGMC) and helped people around the world.

“Akali has been with BJP for a long time. We have fought for the Sikh cause together. Now there are various issues affecting Sikhs across the country. I have been raising my issue in the Sikh community,” he added.