On the auspicious occasion of India’s 73rd...

Warning: This post contains spoilers for House of the Dragon.

Daemon Targyaren (Matt Smith) may not always be the smartest or most cunning character on House of the Dragon. That said, he does know how to take down an enemy (see: the many times he has decapitated or mutilated people this season). Daemon may be bloodthirsty, but he will be a crucial advisor to his wife Rhaenyra (Emma D’Arcy) in the battle against Rhaenyra’s half-brother Aegon II (Tom Glynn-Carney) for the Iron Throne.

So when Daemon declared in the Season 1 finale that the only way Rhaenyra could win the brewing war was by acquiring as many dragons as possible, we should probably listen. After all, this civil war within the Targaryen clan did come to be known as the Dance of the Dragons. Daemon has been quietly gathering dragon eggs—and, apparently, wild dragons—for years in preparation for this very moment. He’s done the math, and he knows who will have the advantage.

Read More: What to Know About the Dragon Daemon Was Singing to on House of the Dragon

ADVERTISEMENT
In the battle between Rhaenyra’s loyalists (a.k.a. Team Black) and Aegon II’s allies (a.k.a. Team Green), here’s where each house stands in terms of dragon riders, mounted dragons, and wild dragons yet-to-be-claimed.

Rhaenyra (Milly Alcock, later Emma D’Arcy) was one of the youngest dragon riders in Targaryen history at just seven years old. She rides a yellow dragon named Syrax, named after a goddess of Valyria. The two share a deep bond: Syrax as hatched from an egg placed in Rhaenyra’s cradle as a baby. Still, as Rhaenyra notes to Daemon, Syrax and several of the other dragons on team Black have not seen battle. Notably, Syrax lays eggs during Season 1, and we see Daemon snatch them up.

Caraxes is a large red dragon ridden by Daemon Targaryen. Perhaps it won’t surprise you to learn that Caraxes—like Daemon—is know to be particularly brutal, described as one of the fiercest dragons in the Dragonpit. He’s nicknamed Blood Wyrm because of his color and disposition.

Rhaenys Targaryen’s (Eve Best) dragon Meleys is scarlet in color and nicknamed the “Red Queen.” The swift Meleys made a big splash at Aegon II’s coronation, killing scores of King’s Landing civilians—but, annoyingly, not the drunken king himself. Apparently Rhaenys has always been one for showy dragon moments: She arrived at her wedding to Corlys Velaryon on dragonback. Just imagine the coronation for the Queen Who Never Was if she’d only been allowed to inherit the Iron Throne: It would have been a dragon extravaganza!

Rhaenyra’s eldest son Jacaerys (Leo Hart, and then Harry Collett) rides Vermax. To prove that Jacerys (who looked nothing like his father) was a true-born Targaryen, his parents gifted him a dragon egg at birth. The egg hatched Vermax, but the unfortunate consequence of that political stunt is the dragon is still pretty small by the time the Dance of the Dragons takes place.

Lucerys Velaryon (Rhaenrya’s second son who is played by Elliot Grihault) rode the white dragon Arrax, who was still pretty small when he met a rather brutal end. (Like Vermax, Arrax’s egg was given to his rider at birth.) When Aemond decided to chase down his nephew Lucerys, demanding retribution for the eye Lucerys took from Aemond in childhood, Aemond’s dragon Vhagar got a little over-eager and…chomped on Arrax. So long, Arrax and Lucerys. We barely knew you.

Read More: How House of the Dragon’s First Dragon Fight Differs From the Books

We don’t know much about Joffrey (Rhaenyra’s third son) or his dragon yet. But Daemon mentions Tyraxes as one of the younger, smaller dragons on Team Black.

The newly crowned king Aegon (Tom Glynn-Carney) describes his dragon as the most beautiful in the world: The golden beast has pink-veined wings. But Sunfyre cannot match the size or power of Aegon’s brother’s mount, Vhagar, reflecting the dynamic of the two boys in real life.

Vhagar is the largest and arguably most powerful dragon alive. The sister of Balerion the Black Dread, Vhagar is also the only living dragon to have flown to Westeros with Aegon the Conquerer. She is too big for the Dragonpit and unclaimed at the beginning of the show.

Laena Velaryon (Nanna Blondell) claims Vhagar as her mount. But eventually Laena enlists Vhagar to help her die by suicide during a traumatic childbirth scene. Laena’s daughter Rhaena presumes she will inherit the beast, but Viserys and Alicent Hightower’s son Aemond steals away in the middle of the night to claim Vhagar as his own. He succeeds, prompting a fight that results in Aemond losing his eye. Aemond declares the exchange worthwhile, and his battle with Lucerys proves that he’s probably right.

We first hear mention of Dreamfyre in Episode 2 when Daemon steals a dragon from Dreamfyre’s nest for his non-existent child with Mysaria (Sonoya Mizuno). But the blue-silver beast named Dreamfyre always seemed destined to be paired with her eventual rider Helaena Targaryen (Phia Saban), a dragon-dreamer who can predict the future. Though Helaena seems to prefer playing with bugs to dragon-riding, her status as King Aegon II’s sister-wife means we’ll probably see her fight on Dreamfyre.

Read More: Why Targaryen Dreams Are So Important in House of the Dragon 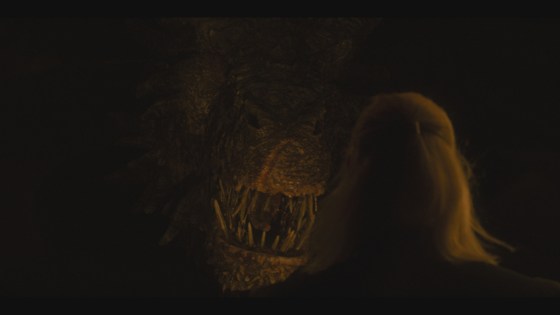 Daemon isn’t just collecting dragon eggs. He’s trying to tame wild dragons and recruit them to Rhaenrya’s cause. Dubbed “Bronze Fury” because of his color, Vermithor is about 100 years old and the second-largest living dragon, after Vhagar. Previously ridden by Viserys’ grandfather, Jaehaerys Targaryen, Vermithor has been without a rider since Viserys took the throne. We see Daemon approach Vermithor’s lair in the caverns of the Dragonmont by singing to him in Valerian.

Once ridden by Laenor Velaryon (Theo Nate and later John Macmillan), Seasmoke is presumed to be riderless now that Laenor has faked his own death. Laenor could theoretically cross the Narrow Sea, return to his home, and claim Seasmoke, but that would ruin what we hope is a relaxing and lovely life as a non-royal. Daemon says that Seasmoke still lives on Driftmark.

Daemon mentions that another dragon besides Vemithor lives in the Dragonmont. Silverwing was the mount of Alyssane Targaryen, the sister-wife of Viserys’ grandfather, King Jaeherys. When Daemon mentions Silverwing, he catches the attention of his daughter Rhaena, who remains dragon-less after Aemond mounted Vhagar, the dragon that was arguably her birthright.

Finally, Daemon mentions three wild dragons who nest on Dragonstone. Though they do not yet have names in the show, we know from Fire & Blood they will come to be known as Cannibal, Grey Ghost, Sheepstealer. Rhaenyra asks who will mount all these extra dragons—just about every adult Targaryen save Rhaena has a dragon, and Rhaenyra’s children with Daemon are still too young to ride. The answer to that question may determine the outcome of this civil war.

from TIME
via Time.com

Midterms Free of Feared Chaos as Voting Experts Look to 2024