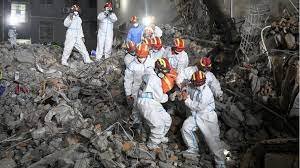 Chinese media reported that 53 people were killed when a building collapsed last week in central China and 10 were rescued. Authorities said a search for the missing people had ended on Friday.

The last survivor was released just after midnight on Thursday, 5 days after a residential and commercial building in Changsha town suddenly collapsed on April 29.

At least nine people have been arrested in connection with the collapse of a building on suspicion of neglecting building codes or other breaches.

All the survivors were reportedly in a stable condition after being treated at the hospital.

The detainees included the owner of the building, three people in charge of planning and construction and five others who allegedly checked for false security in a guest house on the fourth to sixth floor.