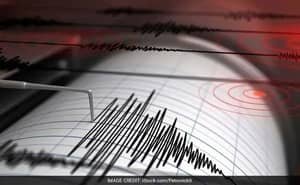 The weather bureau said the epicenter was in Taitung County and was followed by a 6.4-magnitude tremor in the same area on Saturday night, which did not cause any casualties.

The American Geological Service USGS measured Sunday’s earthquake with a magnitude of 7.2 and a depth of 10 km.

At 3:49 p.m., the Japan Meteorological Agency issued a tsunami warning for the Miyakojima and Yaeyama regions of Okinawa Prefecture, but later canceled it.

The Railway Administration of Taiwan said three carriages derailed at Dongli station in eastern Taiwan after part of a platform canopy collapsed. According to firefighters, one person was injured.

About 68 people are also trapped in the scenic Chike mountain area by a blocked road, although there are no injuries, the department added.

The quake was felt across Taiwan, the weather bureau said. Buildings in the capital, Taipei, shook briefly.

Science parks in the southern cities of Tainan and Kaohsiung, home to large semiconductor factories, said there was no impact from the operation.

Taiwan lies near the junction of two tectonic plates and is prone to earthquakes.