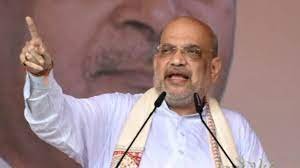 Home Minister Amit Shah on his first visit to Bihar after Nitish broke alliance with BJP, slammed Nitish-Lalu-Congress trio at his public address in Purnea, Bihar.

HM Shah further said, “The people of Bihar will going to reject JDU and RJD duo and elect BJP for the sake of development. BJP will form govt with full majority in Bihar after 2025 assembly elections.”

Union Home Minister Amit Shah on Friday hit out at Bihar Chief Minister Nitish Kumar, saying he had sat on the lap of the RJD Congress to become the Prime Minister.

Shah claimed that the BJP will form the government with full majority in the state, that Kumar has no ideology. “In 2014, Bihar CM Nitish Kumar had only 2 Lok Sabha seats, ‘naa ghar ke rahe the, naa ghaat ke’. Come 2024 Lok Sabha elections, the public of Bihar will wipe out the Lalu-Nitish duo,” Shah said at his ‘Jana Bhavna Mahasabha’ in Purnea.

Can Nitish babu become PM by changing political alliances? Since his entry into politics, he has betrayed many. Lalu ji beware Nitish babu may sit on Congress lap tomorrow and leave you behind: Union Home Minister and BJP leader Amit Shah in Purnea