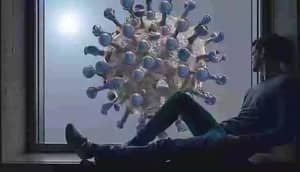 New Delhi: When the report came positive without any symptoms of Omicron virus infection, once it was not believed. I had no cough, no fever, no symptoms like a sore throat. I was all right.

I did not feel at all that I was corona infected. This was stated by Sahil Thakur, a 27-year-old businessman who was the first Omicron infected of Delhi. Now cured, Sahil told that he had returned to Delhi after traveling from Dubai.

Was living a normal life even after being infected

Sahil told that on December 4, he reached Delhi airport from Dubai. During this, he had exited the airport using the e facility. He was not investigated. After reaching home in Rohini, he was living a healthy and normal life.

He had to go to Mumbai for some work, so three days later, on December 7, the RTPCR test of Corona was done. The next day the investigation report confirmed his corona infection. On December 10, he received a call from the Health Department that his new variant of Corona had been found to be infected with Omicron.

Was in isolation for several days

Actually, when Sahil Corona got infected, his travel details were seen, which also had information about his return from abroad, so genome sequencing of his sample was also done. He said that he himself was living in isolation at home as a precaution.

In such a situation, he did not like the security personnel being kept outside him. After this, on December 11, an ambulance was sent to his house to take him to Loknayak Hospital. On being admitted to the hospital, he was given a separate room. A few days later, more Omicron infected also came there. About 35 to 40 corona infections were there.

Sahil told that due to no symptoms, he did not even take any medicine, but zinc, vitamin C, paracetamol medicines used in the treatment of corona were kept in his room but he did not use them.