At least 46 people have been found... 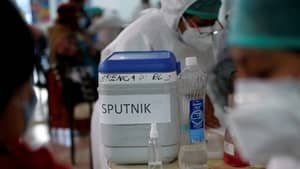 Moscow: Russian Gamaleya Institute believes the Sputnik V and Light vaccines will neutralize the new Omicron variant of COVID19 as they have the highest effectiveness against novel coronavirus mutations, said Kirill Dmitriev, Executive Director of the Russian Direct Investment Fund ( RDIF) on Monday.

However, in the unlikely event that a change is required, Dmitriev said the vaccine maker will have several hundred million Sputnik Omicron boosters in place by February 20, 2022.

“Gamaleya Inst. believes that Sputnik V and Light will neutralize #Omicron as they have the highest potency against other mutations.

In the unlikely event that modification is required, we will have several hundred million Sputnik by February 20, 2022 -Provide omicron boosters, “said Dmitriev.

On November 27th, the WHO named the new variant of COVID19 B.1.1.529, which was detected in South Africa, as “Omicron”. This variant has a large number of mutations, some of which are cause for concern.

The number of cases of this variant seems to be increasing in almost all provinces in South Africa. Based on the evidence presented indicating an adverse change in the epidemiology of COVID19, the Technical Advisory Group on the Evolution of the SARSCoV2 Virus (TAGVE) has informed WHO that this variant should be designated as a VOC and the WHO has designated with B.1.1. 529 as a VOC, called Omicron, it says in a statement.

In the meantime, the WHO has also alerted the countries after a new variant of COVID19 was classified in South Africa, said the Swiss Federal Office of Public Health (BAG) in a statement. Austria, Canada, France, Germany, Italy, and the Netherlands were among those who joined the UK to restrict flights from South Africa.

Developed by the National Research Institute of Epidemiology and Microbiology Gamaleya, the Sputnik-V vaccine was registered with the Russian Ministry of Health and became the world’s first registered vaccine against the coronavirus. Sputnik V is based on a safe and proven human adenovirus vector platform.

The use of two different human adenoviral vectors is a unique approach that makes it possible to stimulate the immune response and provide long-lasting immunity.

The effectiveness of the Sputnik-V vaccine is confirmed at 91.6 percent, the results of the phase III clinical trial of the vaccine are published in the Lancet, one of the oldest and most respected medical journals in the world.

According to the analysis of data from 3.8 million people vaccinated in Russia, Sputnik V shows effectiveness of 97.6 percent. The vaccine offers 100 percent protection against severe COVID19.