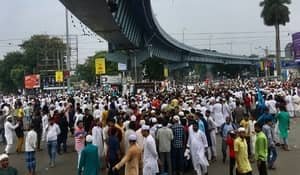 After offering Jumma Namaz, Muslim mobs break mass protests and Violence all over the country upon Nupur Sharma’s remarks on Prophet Mohammad. The day started with peaceful protest in Delhi’s Jama Masjid and Lucknow’s Teele Wali Masjid, but by the evening, Violence escalated at a grand level in major Indian cities such as in Jharkhand’s Ranchi and West Bengal’s Hawada in a chronological and well-pattered way.

The Violence was pre-planned, and several pre-proposals were made on social media platforms regarding mobilizing the Muslim mob to carry out Violence to the scare Majority. It has also been alleged that all the protests in different states and cities happened simultaneously and in the same manner. Several intelligence experts allege the involvement of foreign nations in this well-planned and patterned protest.

The protest structure was the same in all states and cities where stone-pelting happened by putting minors forward so that Police couldn’t attack. Heavy stone pelting, vandalizing vehicles, destroying public property, and several cops were injured amid the violent protest.

The protest escalated to other states and cities by the time elapsed. Uttar Pradesh witnessed heavy stone-pelting, vandalization of vehicles and public property and Violence in Prayagraj, Saharanpur, Lucknow and in several other regions of the state. The state saw the second protest within the span of seven days earlier; it was Kanpur Violence on 3rd June when PM Modi, President Kovind and CM Yogi were present in the city. CM Yogi directed the police force to strict action against conspirators of the protest. The Police made several arrests in the matter from Saharanpur, Hathras, Deoband, Lucknow, Prayagraj and several other areas.

Therefore, the violent protest that breaks out in nearly all states and essential cities must be invested due to its suspicious pattern and organized planning seen similar in all sites wherever protest breaks. NIA should have to interfere in this matter to investigate the funding route of the protest and the International conspiracy behind this cause; without such high financial assistance, it’s impossible to carry out a protest of this much intensity.