Benefits of The GHEE(Clarified Butter): Story of the Forgotten Superfood and Cooking Oil 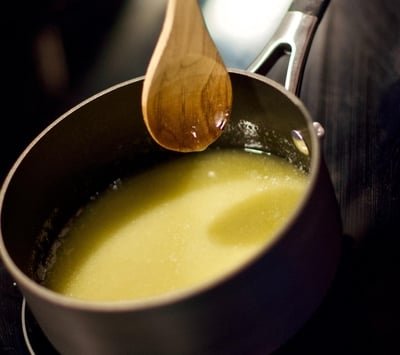 Ghee also called as clarified butter and Desi Ghee(Pure Indian Ghee) that originated in ancient India, is basically a highly nutritious milk product. It is commonly used in cuisine of the Indian subcontinent, traditional medicine, and religious rituals.

The Superfood Golden Butter Oil or “GHEE” which has also been a victim of negative marketing and stigma from the west, labeled this superfood to be fattening, and super Unhealthy causing an increase in Cholesterol and Heart attack. And how people got manipulated with this western Jargon. But the Truth is that GHEE has now found the Premium place on the shelves of the supermarkets of the west with the name “Clarified Butter”. This superfood has been negatively marketed and in return, various useless tasteless and smell less refined oil has been promoted as a healthy substitute.

How Desi Ghee(Pure Indian Ghee) is made?

The traditional Indian method of making ghee(bilona) is quite elaborate. Cow’s milk is boiled and cooled. Then a spoonful of curd is added to this milk and kept at room temperature overnight. The curd is then churned to extract butter from it. This butter is then boiled so that the water evaporates leaving behind pure ghee.

As you can see, the process is quite slow and traditionally, all of this was made at homes without any use of machines. When ghee-making became a major revenue churner for the dairy industry, things changed. Very few brands, like The Nature’s Way (TNW), based in Gujarat, retain the age-old practices of hand-churning ghee.

Indians have been consuming GHEE for centuries, When butter is simmered, a golden yellow liquid is left behind this liquid is called GHEE. It is a gold mine of nutrients, has therapeutic values, and can be used externally and internally. Due to its plethora of benefits, GHEE is considered Sacred in India, no matter what region you come from India, it has been used in our Delicacies. However it so happened in the 1970s-80s, Foreign Refined oil companies in order to sell their so-called “Heart Healthy Oils” intensively down publicized the GHEE calling it fattening and unhealthy for the heart.

Manipulated by such marketing strategies we changed our household cooking mediums to refined oils and some so-called “Health Conscious” people opted for western Olive oil for 5 times the price of refined oils. And gradually Ghee vanished from the plates of people and the refined oil got the place, which has been now proven in numerous studies to be nothing else than colorless, odorless, tasteless, and nutritionless liquid, produced after so much refining process that they become readily toxic when heated. Using Refined oil has become the number one reason for the increased heart attack in the world.

What Makes the GHEE so special, Benefits of Ghee?

Short-Chain Fatty Acid(SCFA) is the unique type of fat found in GHEE which is produced when dietary fiber is fermented in the colon. Short-chain fatty acids are readily utilized by the body for energy, which helps in digestion also. Unlike the Long-chain saturated fat found in Animal fat, Short-Chain Fatty acids do not need to be broken down in the small intestine to digest and hence are immediately used to produce energy.

Due to this unique SCFA Ghee is not fattening but cuts the fat from the most stubborn parts of the body. Being one of the highest sources of Conjugated Linoleic Acid(CLA) it mobilizes the fat cells to shrink down to their original sizes.

Another reason for using GHEE is that it has a very high smoke point of over 252 degrees Celsius, way more than any other cooking oil. The smoke point of an oil is the temperature at which the fatty acid bond tends to break and the oil becomes unfit for consumption. This makes GHEE suitable for all types of cooking including deep frying.

3. Good For Diabetics (Reduces the Glycemic Index of food)

GHEE reduces the glycemic index of the food due to which there is a slow and steady release of blood sugar levels. This is ideal for diabetics and also helps assimilate nutrients.

GHEE is Packed with Butyric Acid. Now, what’s this butyric acid? Well, our body converts fiber to Butyric acid for its utilization, since ghee has a plethora of which makes this job easier. Hence meal prepared with ghee instead of other cooking oils is lighter on the stomach.

Contrary to the popular belief it actually reduces bad cholesterol. Rich in antioxidants conjugated linoleic acid and fat-soluble vitamins A, D & E, Ghee is heart-friendly in the true sense. And numerous studies are proving it now.

Ghee has been a staple part of various beauty care rituals since time immemorial in Indian Culture. Its vital fatty acids act as a nourishing agent that can do wonders to infuse life in your dull skin cells. Pure ghee is made out of cow’s milk and is said to be extremely powerful in giving you a soft, clear and supple skin. Ghee is known to be suitable for all skin types and it also has vital fatty acids that help in hydration of the skin cells keeping it fit naturally.

Much like all other fats, ghee too has been allegedly guilty of raising cholesterol levels. But contrary to popular belief, ghee is in fact a much safer bet to invest in for heart health as compared to refined oil for consumption. The book ‘Healing Foods’ notes that the fats present in ghee are not associated with heart disease in the way that long-chain fatty acids are, as they are used directly as energy by the body and not stored as fats. Studies have shown that ghee can be good for lowering bad cholesterol and increasing good cholesterol which makes it guilt free for consumption.

There is nothing pleasant about cold and clogged nostril. You have difficulty in breathing your taste sense is hampered, and  the headache and exhaustion that follows. Ayurveda has an interesting nasal drop remedy that may help open the clogged nose effectively. Ayurvedic experts call it the Nyasa treatment for cold and it involves pouring a few drops of warm pure cow ghee into both the nostrils, first thing in the morning. Doing so may provide quick relief as the ghee travels all the way down to the throat and soothes the infection. Make sure, the ghee is pure and warmed to lukewarm temperature.

Apart from it if you feel low in energy, if you want to build muscle mass, or have joint pains, skin problems or hormonal imbalance, fertility issues, or if you want your brain to function to its optimum level. Then you must consider including Ghee in your diet. Ghee suits all body types and irrespective of your body goals, fitness level, gender, or age you can include 2 to 4 teaspoons of Ghee in your diet without any guilt.

Not only this, But it has Ayurvedic Medicinal Properties as well which will be explained in Separate Article.