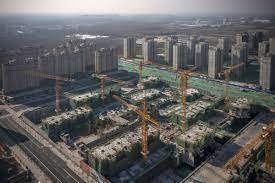 It began as an act of protest by fed-up apartment buyers in a single project in a city in central China. Now tens of thousands of people across the country are withholding mortgage payments on homes that developers, including China Evergrande Group, have yet to complete.

A fierce boycott of loans worth up to 2 trillion yuan ($296 billion) threatens to deepen China’s property slump by shifting focus from the country’s struggling real estate companies to its massive banks. Lenders have relied on mortgages as their safest source of income as Covid lockdowns hamper growth.

Politicians are on alert. Financial regulators have called on banks to increase lending to builders to help complete projects, and officials are even considering deferring payments to homeowners, according to people familiar with the matter. One bank after another assured investors that the risks were controllable and their exposure to delayed projects was small, even as the lender’s shares fell. Shares and bonds of Chinese real estate companies were also pulled down, including those of some big players long seen as sheltered from the sector’s troubles. “If this trend goes unchecked and snowballs further, there is a risk that it could lead to a deterioration in the credit profiles of Chinese banks and cool the recent surge in property sales,” said Chang Wei Liang, macro strategist at DBS Bank. .

The protests are intensifying a crisis that Beijing appears to have under control, despite a wave of defaults by Evergrande and other developers in recent months. The real estate market has started to stabilize, with sales jumping last month compared to May. The chairman of one of the biggest developers said the market had bottomed out.

While the boycotts so far affect only a fraction of lenders’ combined mortgage portfolios, the speed with which the protests have grown has surprised many. They began in late June with a social media blast signed by 900 buyers at the stalled Evergrande development in Jingdezhen, a city near the Yellow Mountain known for its porcelain. They publicly asked the local government and the company to restore the construction within three months or they would stop paying. As of Sunday, the movement had spread to at least 301 projects in about 91 cities, according to data from a crowdsourced document called “WeNeedHome.”

That’s up from just 28 projects less than a week earlier, according to a note from analysts at Jefferies Financial Group Inc. led by Shujin Chen. China Real Estate Information Corp. estimates that delayed projects in 24 major cities cover 24.7 million square meters (266 million square feet), equal to about 10% of properties sold last year. Although the original social media post threatened to withhold cash in a few months, there are already reports from banks of missed payments. “The stakes are high,” Nomura economists led by Ting Lu wrote in a note on Wednesday.

Tracking the scale of the protest has become increasingly difficult after China began censoring online documents with the number of boycotts in mid-July. These shared files have been a key source of data for global investors and researchers.

Gao Yang bought a 900,000 yuan apartment in the central city of Nanchang from Sinic Holdings Group Co. in 2019. He has been paying off the mortgage for two years, but the apartment unit is still not finished. Gao has taken dozens of three-hour train rides from his current home in Hangzhou to appeal to the local government and developer to do this. Sensing little progress, he plans to join the boycott next month by withholding his monthly payment of 4,000 yuan.

“That’s about half of my income – it’s a huge pressure,” says the 32-year-old designer, adding that his salary has been cut by a third due to the economic slowdown. “I can tighten my wallets if it is possible to resume construction one day.” Sinic and Evergrande did not immediately respond to requests for comment.

The boycotts reflect the unique risks of buying a home in China. While consumers in many countries need to put down deposits to secure a housing unit before it is built, they typically do not pay off the mortgage until they get it. In China, loan repayments start with this initial deposit and can last for years when projects are delayed. That pile of pre-sale money helped developers feed the housing boom of the past decade, allowing them to start new projects before old ones were finished. The builders were basically borrowing from the homebuyers themselves, except they owed them housing instead of cash.

The music began to stop last year with a government crackdown on loans from over-indebted firms, triggering at least 18 bond defaults in recent months worth more than $26 billion, including Evergrande and other big names like Sunac China Holdings Ltd. and Kaisa. Group Holdings Ltd. Cash pressures have made it difficult for developers to complete projects, despite repeated pressure from Beijing to complete construction.

Nomura’s Lu estimates that Chinese developers delivered only about 60% of the homes they presold between 2013 and 2020. China Evergrande, which has seen protests over stalled projects since last year, faces the most boycotts, according to online statistics. More than a dozen more builders are the goal.

Real estate accounts for about 78% of household wealth in China—double the U.S. rate—and families typically save for years and borrow from friends and family to buy a home. When the Evergrande debacle unfolded last year, many market watchers said the financial contagion would be limited because home buyers in China often pay in cash. But some took advantage of mortgages, and the boycott underscores how much of the pain of the crisis fell on households.

According to the People’s Bank of China, outstanding mortgages in China totaled 38.3 trillion yuan at the end of 2021. GF Securities Co. expects that up to 2 trillion yuan of mortgages could be affected by the mass rejection. This is the total balance of the loans; the amount that could be withheld will be less.

Other impact estimates are less dire. If every buyer defaulted, it would increase NPLs by 388 billion yuan, Jefferies’ Chen said. Banks say the impact is even lower. Lenders detailed about 2.11 billion yuan of loans threatened by the protests, according to statistics from banks that disclosed their exposure.

The protest is all the more remarkable because Chinese families rarely walk away from their mortgages and banks are legally entitled to demand full repayment, according to DBS’s Chang. Still, consumers can hope that collective action will force a solution, especially as Beijing tries to contain social unrest ahead of the Communist Party Congress in October. “This is a political protest,” said Diana Choyleva, chief economist at Enodo Economics, in an interview with Bloomberg Television. “It will not be a banking crisis; they are not there. But it’s potentially a crisis of confidence — and one that the Chinese Communist Party is extremely worried about.

According to Jefferies’ Chen, authorities face a dilemma. The loosening of lending rules to benefit homebuyers may encourage more delinquency, but the government’s priority remains social stability. “Our basic case is for the government to step in and untie the Gordian knot,” DBS’s Chang said