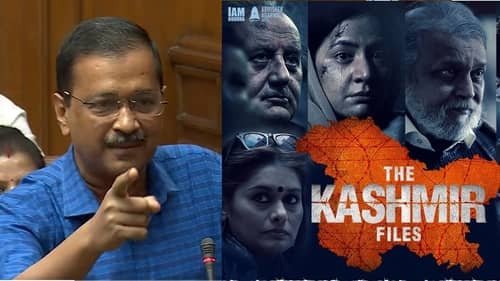 Delhi CM Arvind Kejriwal bombards over Kashmir Files says Vivek Agnihotri should upload the film on YouTube to make it tax free in Delhi. Kejriwal refused to except the demand of the Delhiites to make the film tax free in the region.

Earlier, Nil Batte Sanata and Sand Ki Ankha were made tax free in Delhi and for the same Kejriwal applauded his move for making both the films tax free in national capital by moving on twitter. The netizens calling this move as expose of level of hypocrisy.

After winning Punjab, Kejriwal and company are on clouds thus, assuming safe passage to insult the sentiments of the Indians and Hindus. The craze of Kashmir Files can only be understood by figuring out it’s collections that crossed 200 Crores and became highest grossing film in past 2 years beating Bollywood Biggies like Sooryawanshi, 83, Antim, Radhe Shyam, Bachchan Pandey and many more.

The film might join 300 crore club if the craze persists but, it’s crystal clear that the film will easily capture 250 crores into the pockets. The another big fact about the film’s is that film is made at only 14 crore of Budget thus, became biggest profitable venture for Bollywood.

Thus, support this movement and quash all the cruel hypocrisies, we Indians have to come together to tackle these type of hypocrisy and anti-hindu behavior. Support Kashmir Files by watching it in theatres and inspires others too to watch.