G20 Meet Fails to Cap the Prices of Russian Oil 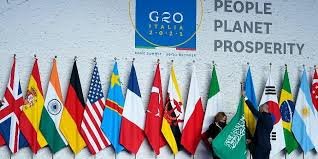 MOSCOW: Finance ministers from the G20 nations ended their meeting in Indonesia on Saturday without an agreement on a US proposal to cap the price of Russian oil.

US treasury secretary Janet Yellen had gone to the gathering to solidify support for the incomplete plan. She said the proposal could be a powerful tool to mitigate the economic fallout of the war in Ukraine and curtail Russia’s ability to profit from soaring energy costs and further fund its military aggression.
The leaders of the G7 nations had agreed last month in principle to consider the plan to tamp down global oil prices by imposing a discount on Russian oil, but the details of how such a mechanism would work remains unclear.

Yellen and other ministers at the meet placed the blame for global food insecurity and spiraling energy prices squarely on Russia. The finance chiefs also reached what one called a “strong consensus” on issues including global food security at the two-day meeting.