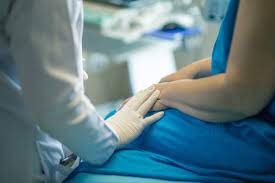 In Michigan, Democrats took aim at the Republican nominee for governor almost immediately after the primary with a television ad highlighting her opposition to abortion, without exceptions for rape or incest.

In Georgia, Democrats recently attacked the Republican governor in another television ad, with women speaking fearfully about the specter of being investigated and “criminalized.”

And in Arizona, the Republican nominees for both Senate and governor were confronted almost instantly after their primaries with different ads calling them “dangerous” for their anti-abortion positions.

All across America, Democrats are using abortion as a powerful cudgel in their 2022 television campaigns, paying for an onslaught of ads in House, Senate and governor’s races that show how swiftly abortion politics have shifted since the Supreme Court overturned Roe v. Wade in late June.

With national protections for abortion rights suddenly gone and bans going into effect in many states, senior White House officials and top Democratic strategists believe the issue has radically reshaped the 2022 landscape in their favor. They say it has not only reawakened the party’s progressive base, but also provided a wedge issue that could wrest away independent voters and even some Republican women who believe abortion opponents have overreached.

In the fallout of the ruling, Democrats see the potential to upend the typical dynamic of midterm elections in which voters punish the party in power. In this case, although Democrats control the White House and both chambers of Congress, it is one of their top policy priorities — access to abortion — that has been most visibly stripped away.

“Rarely has an issue been handed on a silver platter to Democrats that is so clear-cut,” said Anna Greenberg, a Democratic pollster working with multiple 2022 campaigns. “It took an election that was going to be mostly about inflation and immigration and made it also about abortion.”

In the roughly 50 days since the Supreme Court’s ruling, Democrats have flooded the airwaves in many of the nation’s most closely watched contests, spending nearly eight times as much as Republicans have on ads talking about abortion — $31.9 million compared with $4.2 million, according to data from AdImpact, a media tracking firm. And in the closest Senate and governor’s contests, Republicans have spent virtually nothing countering the Democratic offensive.

By contrast, in the last midterms four years ago, Democrats spent less than $1 million on ads that mentioned abortion-related issues in the same time period.

The 2022 advertising figures do not include money spent on the recent anti-abortion rights referendum in Kansas. The landslide defeat of that measure, particularly in a traditionally conservative state, has only further emboldened Democratic strategists and candidates.

There are risks to focusing so heavily on abortion at a moment when Americans are also expressing intense anxiety over the economy. But Democrats are plowing ahead, particularly in key Senate races.

More abortion ads have aired in the Senate races in North Carolina, New Hampshire, Arizona and Washington — and even in Connecticut and Maryland, two states with secure Democratic incumbents.

“I clearly believe abortion is going to matter because I think it cuts across demographics and it really does get into many voters, including Trump voters and independents, and their concept of personal freedom,” said J.B. Poersch, the president of Senate Majority PAC, a Democratic super political action committee that has already funded abortion commercials in multiple states.

But Republicans say Democrats risk ignoring the economic concerns that polls have shown are paramount.

“They’ve got a lot of bad news, and they think that’s the only good news they’ve got,” said former Representative Steve Stivers of Ohio, who led the House Republican campaign arm during the 2018 midterm elections. “If they want to be a single-issue party, that’s on them.”

If Democrats do focus overwhelmingly on the issue of abortion at the expense of other matters, Mr. Stivers suggested, “they’ll get smoked on the economy, where they’re already losing ground.”

For months, Democrats have been bracing for a Republican wave this fall, prompted by President Biden’s diminished popularity, high gas prices and inflation, and they still face a difficult political environment. But Mr. Biden is expected to sign a sweeping legislative package soon that addresses climate change and prescription drug prices. In addition, gas prices are declining, and there are at least some tentative signs that inflation may be slowing.

Those developments, combined with the backlash to the Supreme Court’s ruling on abortion, have raised Democrats’ hopes of maintaining power after November. Certainly, they plan to advertise their legislative achievements while making other attacks on Republicans, whom they argue are a threat to democracy.

For now, new abortion-focused Democratic advertisements are popping up seemingly almost every day, including in Alaska, Iowa and Virginia.

Some abortion ads use the specific words and positions of Republican candidates against them. Some are narrated by women speaking in deeply raw and personal terms. Some use Republicans’ unyielding stances on abortion to cast them more broadly as extremists.

And some, like one early ad hitting Doug Mastriano, the Republican nominee for governor in Pennsylvania, do all three. “Doug Mastriano scares me,” a woman declares at the beginning of the spot.

One particularly emotional spot came from Stacey Abrams, the Democratic nominee for governor of Georgia, who used a montage of women to target Gov. Brian Kemp’s stance on abortion.

“He supports a total ban,” one woman says in the ad. “Even if I’m raped,” another says. More women continue, one after another: “A victim of incest. Forced pregnancy. Criminalized women. Women with jail time.”

Democrats aim to connect abortion messaging to the broader argument that hard-line Republicans are seeking to strip away fundamental freedoms.

“The arguments Democrats are using in those ads don’t stay contained to the abortion space,” said Jennifer Palmieri, the former White House communications director under President Barack Obama and a longtime party strategist. “You’re telling them something about their temperament, their judgment and their values.”

In at least five states, Democrats have used the phrase “too extreme” to call out Republicans, using abortion as the example.

Often, abortion is the Democrats’ opening gambit at the start of general election ad campaigns. Just this month, ads have targeted Tudor Dixon in the governor’s race in Michigan and Kari Lake in the governor’s race in Arizona. And a day after Minnesota’s primary for governor, Democrats began airing an ad calling Scott Jensen, the Republican nominee, “too extreme” on abortion.

The next major test of abortion’s political power comes in a special election on Aug. 23 in New York.

County Executive Pat Ryan in Ulster County, N.Y., the Democratic candidate in that race, has made abortion the focus of his campaign, even in a state where access remains protected. In a new ad this week, Mr. Ryan featured a carousel of national Republicans arguing that the party would pursue a nationwide ban.

A Democratic super PAC is spending $500,000 to promote Mr. Ryan, a veteran, with an abortion message. “He sure didn’t fight for our freedom abroad to see it taken away from women here at home,” the narrator says.

The election is being closely monitored as a barometer of the issue’s power. Democrats have overperformed — even in defeat — in two other special elections since Roe v. Wade was overturned, in Minnesota and Nebraska.

Meredith Kelly, a Democratic strategist and ad maker, said one factor that made abortion “extremely powerful” was the idea that “Republicans are taking something away.”

Research has shown that the notion of losing rights can be galvanizing for voters, which Ms. Kelly saw firsthand in 2018 when she guided the messaging for the House Democratic campaign arm. The party took over the House in part by bludgeoning Republicans for their repeated efforts to repeal the Affordable Care Act.

“When you take something away from voters, especially something as cherished and crucial as health care, which is what this is, that is a really politically perilous decision,” she said of Republicans’ approach to abortion rights.

Some Republicans are trying to backpedal or soften their stances.

In Arizona, ads are hammering Blake Masters, the Republican Senate candidate, for calling abortion “demonic,” talking about punishing doctors who perform the procedure and opposing exceptions for rape and incest during the primary. In a post-primary interview with The Arizona Republic, Mr. Masters called the state’s 15-week ban “a reasonable solution” and expressed his desire to “reflect the will of Arizonans.”

On the airwaves, though, few Republicans have had an answer. One notable exception has come in the New Mexico governor’s race; Mark Ronchetti, the Republican nominee to take on Gov. Michelle Lujan Grisham, has been under fire over his stance on abortion.

“I’m personally pro-life, but I believe we can all come together on a policy that reflects our shared values,” Mr. Ronchetti said in a campaign spot that detailed his position on the issue.

Josh Shapiro, the Pennsylvania attorney general and Democratic nominee for governor, opened his first ad of the general election by hitting Mr. Mastriano on abortion.

In an interview, Mr. Shapiro said voters were especially attuned to the issue because the state’s Republican-led Legislature had passed strict abortion limits that he would veto and that Mr. Mastriano would sign.

“There is an intensity around this,” he said. “They know the next governor of Pennsylvania is going to decide this.”

The evening before, Mr. Shapiro said, he met a Republican woman in the Lehigh Valley who told him that she was voting for him — her first Democratic ballot — because of abortion.

“It has brought people into our campaign and brought people off the sidelines to get engaged unlike any other issue,” Mr. Shapiro said of abortion’s influence after the Supreme Court’s ruling. “We just saw an explosion.”

Europeans discriminating against own citizens with Russian ban – politician