At least 60 injured after protesters stormed into Iraqi parliament 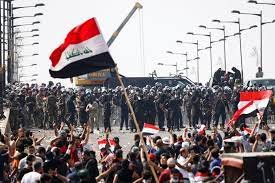 At least 60 people were injured when protesters stormed Iraq’s parliament for the second time in a week.

Supporters of cleric Muqtada al-Sadr have once again breached Baghdad’s heavily guarded Green Zone as they oppose the nomination of a pro-Iranian rival prime minister.

Mr Sadr’s bloc won the most seats last October, but is out of power due to the political deadlock.

Six of the injured are in serious condition, the ministry said in a statement.

The protesters of cleric Muqtada al-Sadr have promised to occupy the parliament until further notice, AFP reports.

It originally clustered at the end of the bridge leading to the heavily guarded Green Zone, home to many of the capital’s most important buildings, including embassies.

But dozens of them tore down concrete barriers protecting the area and ran into parliament, waving Iraqi flags and pictures of Mr Sadr.

He called on the protesters to “maintain their peaceful progress, avoid escalation and follow the instructions of the security forces, which aim to protect them and protect official institutions”.

Saturday’s protest follows a protest staged on Wednesday, when hundreds of people stormed the parliament.

The unrest comes after nine months of stalemate, during which disputes between the country’s various political factions prevented the formation of a new government.

Mr. Sadr, a Shiite cleric who wants to end US and Iranian influence in Iraq’s internal affairs, declared victory for his nationalist Saeroun movement after October’s election.

But since then it has proved impossible to form a new governing coalition, as Mr Sadr has refused to cooperate with rivals.

He and his supporters have opposed Mohammed al-Sudani’s candidacy for prime minister because they believe he is too close to Iran.