China summons US ambassador to protest over Pelosi’s Taiwan trip 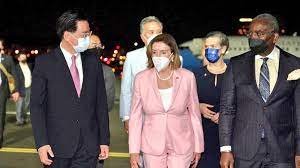 An enraged China summoned US envoy Nicholas Burns late on Tuesday to raise “strong protests” against US House Speaker Nancy Pelosi’s visit to Taiwan, an autocratic democracy that Beijing has claimed as its own.

Burns was summoned to China’s Foreign Ministry by Vice Foreign Minister Xie Feng soon after Pelosi’s flight landed in Taipei and as tensions between Beijing and Washington grew over the visit.

The official Xinhua News Agency reported that Burns was summoned on Wednesday morning.

Burns was “urgently called up” even as the People’s Liberation Army’s (PLA) Eastern Theater Command launched a series of joint military operations around Taiwan from Tuesday night, the biggest show of Chinese military power in years.

“Knowing that Pelosi is risking widespread condemnation to deliberately provoke and play with fire, Xie said this is a serious violation of the one China principle and the three joint Sino-US communiques,” China’s official Xinhua news agency said in a report. early on Wednesday.

“This move is extremely egregious and the consequences are extremely serious.” China will not stand idly by,” Xie noted.

“The United States has deleted from the US State Department website key terms such as Taiwan is part of China, included Taiwan in its so-called ‘Indo-Pacific Strategy,’ openly strengthened its ties with Taiwan and increased arms sales to the region, and supported separatist activities for ‘Taiwan independence,’” Xie said.

Using strong rhetoric, Xie said, “Taiwan is China’s Taiwan, and Taiwan will eventually return to embrace its motherland. The Chinese are not afraid of ghosts, pressure and evil.”

Beijing announced a series of economic and trade measures against Taiwan on Wednesday, including suspending imports of citrus fruits, chilled white striped bass – a fish that is very popular in China – and frozen crab from Taiwan starting on August 3, Chinese customs officials said on Wednesday .

“The entry of citrus fruits including grapefruits, lemons and oranges, as well as chilled cranberry and frozen cranberry from Taiwan will be suspended in accordance with relevant mainland regulations and food safety requirements,” said Ma Xiaoguang, a spokesman. for the Taiwan Affairs Office of the State Council.

Ma said the companies had donated money to foundations such as the “Taiwan Foundation for Democracy” and the “Fund for International Cooperation and Development,” organizations Beijing accuses of fomenting “Taiwan independence.”