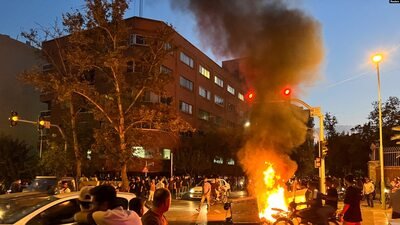 TEHRAN, Iran– Iranian state television said the death toll from hijab protests over the death of a 22-year-old woman in police custody had risen to more than two dozen, without providing further details, as unrest continued.

An anchor on Iranian state television suggested the death toll from mass protests could be as high as 26 on Thursday, but did not elaborate or say how he arrived at that figure.

“26 people and police officers present at the scene of these events, totaling around 32 lost their lives,” the presenter said, adding that official statistics would be released later.

Iranians have gathered “to achieve their basic rights and human dignity … and the government is responding to their peaceful protest with bullets,” said its director Mahmood Amiry-Moghaddam.

The demonstrations in Iran began as an emotional outpouring over the death of Mahsa Amini, a young woman detained by the country’s morality police for allegedly violating a strictly enforced dress code.

Police say she died of a heart attack and was not abused, but her family has disputed that.

Demonstrators were heard shouting “death to the dictator” and “woman, life, freedom” in a video widely shared online during the biggest wave of demonstrations to rock the country in nearly three years.

Some Iranian women burned their headscarves and symbolically cut their hair in protest against the strict dress code, which was echoed in solidarity demonstrations from New York to Istanbul.

Iranian state media this week reported demonstrations of hundreds of people in at least 13 cities, including the capital Tehran.

London-based Iran International TV reported that prominent freedom of speech campaigner Hossein Ronaghi was arrested while giving an interview to them.

The US Treasury has placed Iran’s so-called “morality police” on its sanctions blacklist, calling them responsible for Amini’s death and citing “abuse and violence against Iranian women and violations of the rights of peaceful Iranian protesters”.

“People in Iran are being cut off from online apps and services,” Instagram chief Adam Mosseri tweeted, adding that “we hope their right to be online will be restored quickly.”

People in Tehran and some other cities plan to hold a counter-protest rally after Friday prayers.