Ten people were killed in a racially motivated... 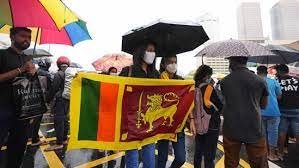 The Indian High Commission based in Colombo dismissed ‘rumors circulating on social media’ that ‘some Sri Lankan politicians and their relatives’ have fled to India amid severe Economic Crisis situation in the country. “The High Commission recently noted rumors circulating in the media and social media that certain politicians and their families have fled to India,” a Twitter statement said.

The condition in the country are deteriorating day by day, as Defense Ministry of Sri Lanka has ordered to shot those who are involved in disturbing public tranquility and found damaging the properties and becoming threat to others.

Mahinda Rajapaksha also resigned from the Prime Ministerial post amid severe Econmic Crisis and tension within the country. Reportedly Rajapaksha was also attacked by some people.

“These are false and baseless reports, which are not true or anything, the High Commission strongly denies,” the tweet said.

It was not immediately clear which ‘political people’ the high commission mentioned in its tweet.

Finland ‘not afraid’ of Russia – minister