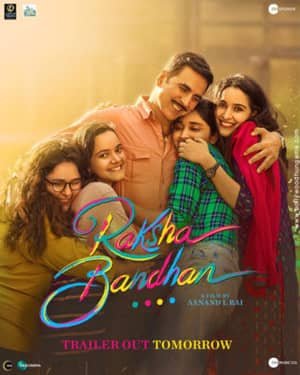 Raksha Bandhan finally released in the theatres on the auspicious festival of Raksha Bandhan starring Akshay Kumar, Bhumi Pednekar and Sadia Khateeb and directed by Anand L. Rai. The film is about bond between brother and sister and their struggle against derogatory practices like Dowry System.

The film is based on derogatory practice of Dowry system which is excellently presented by Anand L. Rai. Akshay Kumar’s act was ravishing and comic. Sadia Khateeb shines over Bhumi. Rest also created considerable impact, but, Akshay’s act was USP of the film.

The film make you laugh, cry, and feel good at the end. This film going to be full Paisa Vasool treat to the audience after a long time. After giving continuous flops Bollywood might made comeback with Raksha Bandhan and the film might also become Industry’s 4th clean hit in post covid era just after Sooryawanshi, Kashmir Files and Bhool Bhulaiya 2.

The film Raksha Bandhan is released in a clash with Aamir Khan’s LSC (Lal Singh Chaddha). But, RB looks much superior to that of LSC which is filled with the propaganda of glorifying terrorism. Despite going for a film glorifying terrorism and insulting Indian Army, a true Indian should refrain form lauding propagandist film like LSC and need to boycott these type of ventures, so no one can even dare to insult Indian Army and Hinduism in future.

We will give Raksha Bandhan 9/10 rating.