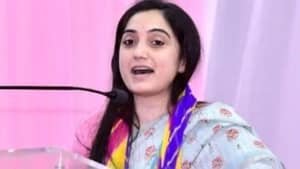 Supreme Court of India rebuked former BJP spokesperson Nupur Sharma upon her plea regarding death and rape threats to her after her controversial speech on Prophet Muhammad. SC said Nupu Sharma should withdraw her plea otherwise SC will dismiss it.

Nupur Sharma is poised to launch her plea in Delhi High Court. SC further said that Nupur Sharma is accountable for spreading tension within country.

SC said, “she is single handedly responsible for what is happening in the country.”

Nupur Sharma representing BJP made controversial comments on Prophet Muhammad during TV debate. After this, she received several death and rape threats. Muhammad Zubair was another name behind commenting poor upon Nupur Sharma. Most catchy point out of this that, apex court didn’t even made attempts to counter those terrorists who were involved in Kanhaiya Lal’s murder.