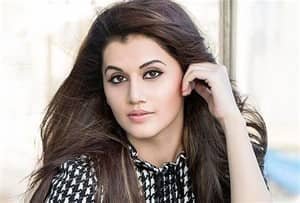 Taapsee Pannu is one of the most influential young actors. She was born on 1 August 1987 in New Delhi, where She did her schooling and then did engineering in computer science.

In 2010, Taapsee Pannu got a chance in Telugu films and made a powerful impact on the filmmakers.

Taapsee made her Bollywood debut through David Dhawan’s comedy-drama Chashme Baddoor (2013) alongside Pakistani singer-actors Ali Zafar, Siddharth Narayan, and Divyendu Sharma. She did a great job and the film became a success.

After that, She went on to make several hits like Baby (2015), Pink (2016), Dil Jungle (2018), and many more. After that, she was the first choice of many promising filmmakers and worked with David Dhawan for the second time in Judwaa 2.

Here is the List of  The upcoming movies of  The Superstar Taapsee Pannu :

BLURR is a thriller movie based on the Spanish film Julia’s Eyes. Produced by Taapsee Pannu, helmed by Ajay Bahl. The release will be on 31 March 2022 in theaters.

Mishaan Impossible is a Thriller Drama film. Directed by Swaroop RSJ, Produced by Niranjan Reddy, Anvesha Reddy. This is a Telugu film.

The film is based on science-fiction that deals with aliens. Directed by Barath Neelakantan. Released in theaters worldwide will be on 1 April 2022.

”Woh Ladki hai Kahan” is a Comedy-drama movie. Stars Taapsee Pannu and Pratik Gandhi In the lead roles. Directed by Arshad Syed. The OTT release date is yet to be announced and may be released in mid-2022.

Tadka is an upcoming Hindi romantic comedy film. Tadka film is a remake of the 2011 Malayalam blockbuster “Salt N Pepper”.

The story is unique and never done before, it is a socio-political drama that spans over two generations with the pandemic as the backdrop. Directed by Sudhir Mishra and produced by Anubhav Sinha. The release date has not been announced.