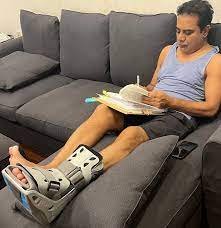 KTR said he was “kicked out” of his WhatsApp because he had more than 8,000 messages. The minister shared a screenshot that says, “This account is not allowed to use WhatApp due to spam. Chats are still on the device.”

Telangana Minister KTR (K Taraka Rama Rao) said that his WhatsApp was blocked for at least 24 hours as he had more than 8000 messages on WhatsApp. “I tried to reply to as many messages as possible but now it has become unavailable for the last 24 hours,” the minister tweeted on Tuesday, sharing a screenshot. The screenshot read: “This account is not allowed to use WhatApp due to spam. Chats are still on the device.”

KTR recently had an accident and was advised to rest for three weeks with a torn ligament in his ankle. He posted a photo of himself sitting on a couch unable to move his left leg. The minister, who is active on Twitter, also asked social media users if they had any advice on any OTT shows to watch. The minister has been getting “get well soon” messages as well as birthday wishes as his birthday was July 24th. These messages probably flooded his WhatsApp inbox as well.

On Tuesday, the minister published a photo of himself signing files while sitting at home. “finishing some file work,” he wrote.

As this started a spat of words between TRS leaders and Sharmila, KTR dismissed Sharmila as a newbie and tweeted, “Guys, let’s leave children out of these political battles. It’s inappropriate and unacceptable. Appeal to all TRS leaders and social media soldiers NOT to be dragged the children of our political opponents. Let’s put them in charge of ideological, political and performance issues.”