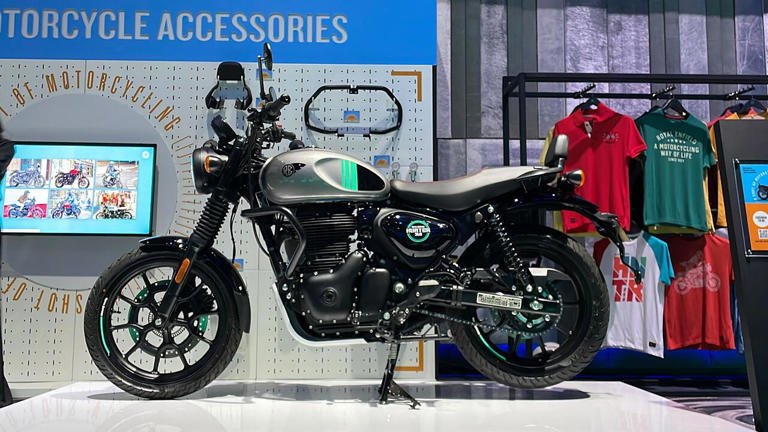 Here we will discuss the royal Enfield hunter 350 bikes I am going to tell you about what is new with this bike and the exciting thing is that a lot is new more than many would have expected.

Let’s start to describe its features and other things. It has an identical engine as the next-generation royal Enfield classic 350 and the royal Enfield meteor 350.

It has a 349cc single-cylinder air-cooled fuel-injected counterbalanced powerplant makes 20.2ps and 27Nm, mated to a 5-speed transmission.

The engine has been built for the lively nature. The other things are also similar to the classic/Meteor 350 range. It is having great features like it having a 41mm telescopic front fork and twin 6-step pre-load adjustable emulsion shock absorbers at the rear.

Braking hardware includes a 300 mm disc up front and a 270 mm disc or 156 mm drum at the rear. The dish brake gets dual-channel ABS while the base model gets a single-channel unit.

Notable features include a halogen headlight and a semi-digital instrument cluster with tripper navigation offered as an option. It gets a 5-speed transmission, in which the 5th gear works as an overdrive.

The claimed top speed is 114 kmph, and the engine delivers a claimed mileage of 36.2kmpl, which is quite good for its displacement. This coupled with a 13-liter fuel tank offers a theoretical range of around 470 km.

If you are thinking of buying the best bike at a reasonable price then this bike is for you. The estimated price is Rs 1.7 lakh (ex-showroom). Post-launch, it will be a perfect rival to the Honda CB350RS, the upcoming Triumph-Bajaj motorcycle, and the existing Jawa 42.

At 800mm, the seat height is as tall as that of the Royal Enfield Himalayan, and the ground clearance runs on smaller 17-inch alloy/spoke wheels, depending on the variant.

The high-end variants (Metro and Metro Rebel) roll on 110-section front and 140-section rear tubeless-seat Zoom XL tires. Weighing in at 181 kg, the Hunter 350 is a whole 14 kg lighter than the Classic 350 and is currently the lightest Royal Enfield bike.

‘Something worse’ than recession coming – JPMorgan