https://ift.tt/qsUEMkt anti-government protests in Iran since the... 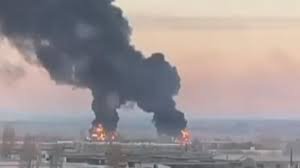 Russia intensified the attack on Ukrainian city Mariupol whereas Russian troops seized the outskirts of the Mariupol city. the attack costs gutted buildings and monuments and mass spread of smoke and fire.

The Ukrainian army and people are not willing to leave the war and has decided to fight back.