Salman Rushdie critical and unable to speak after attack 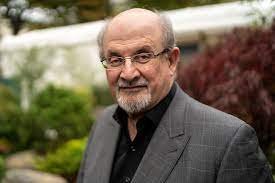 Indian origin British–American novelist Salman Rushdie is on a ventilator and unable to speak after being stabbed on stage in the US, his agent says.

Andrew Wylie said the 75-year-old author could lose an eye after the attack at an event in New York state.

Mr Rushdie went into police protection in the UK in 1988 after Iran’s supreme leader called for his assassination over his novel The Satanic Verses, which some Muslims considered blasphemous.

The New York State Police said the suspect ran onto a stage and attacked Mr. Rushdie and an interviewer at the Chautauqua Institute in western New York state.

Mr. Rushdie was stabbed at least once in the neck and abdomen, authorities said. He was airlifted to a hospital in Erie, Pennsylvania.

“Salman is likely to lose one eye; the nerves in his arm have been severed and his liver has been punctured and damaged,” his agent said.

Police have yet to confirm a motive or charges as they are now obtaining a search warrant to examine the backpack and electronic devices found at the center.

Police said at a press conference that staff and spectators pinned the attacker to the ground, where he was arrested. A doctor in the audience gave Mr Rushdie first aid.

The interviewer who was with Mr. Rushdie, Henry Reese, suffered a minor head injury and was taken to a local hospital. Mr. Reese is the co-founder of a non-profit organization that provides refuge for writers driven out under threat of persecution.

Linda Abrams, a bystander from the city of Buffalo, told The New York Times that the assailant tried to assault Mr. Rushdie even after he was restrained.

“It took five men to drag him away and he was still stabbing,” Ms Abrams said. “He was just furious, furious. Like intensely strong and just fast.”

Salman Rushdie: The writer who emerged from hiding
Terrifying, Terrifying: Authors Condemn Rushdie’s Attack
Indian novelist Mr. Rushdie rose to fame in 1981 with Midnight’s Children, which sold over a million copies in the UK alone.

But his fourth book, published in 1988 – The Satanic Verses – forced him into hiding for almost 10 years.

The surrealist postmodern novel sparked outrage among some Muslims, who saw its content as blasphemous — an insult to religion or God — and was banned in some countries.

Several people were killed in anti-Rushdie riots in India, and in Iran the British embassy in the capital Tehran was stoned.

A year after the book was published, Iran’s Supreme Leader Ayatollah Khomeini called for Rushdie’s execution. He offered a reward of $3m (£2.5m) in a fatwa – a legal decree issued by an Islamic religious leader.

A bounty on Mr. Rushdie’s head remains active, and although the Iranian government has distanced itself from Khomeini’s decree, a quasi-official Iranian religious foundation added another $500,000 to the bounty in 2012.

The Iranian government has not responded to the stabbing of Mr. Rushdie. In their coverage, Iranian media described Mr Rushdie as an apostate – someone who had abandoned or denied his faith.

The British-American citizen – who was born to non-practicing Muslims and is himself an atheist – has become a vocal supporter of free speech and has defended his work on several occasions.