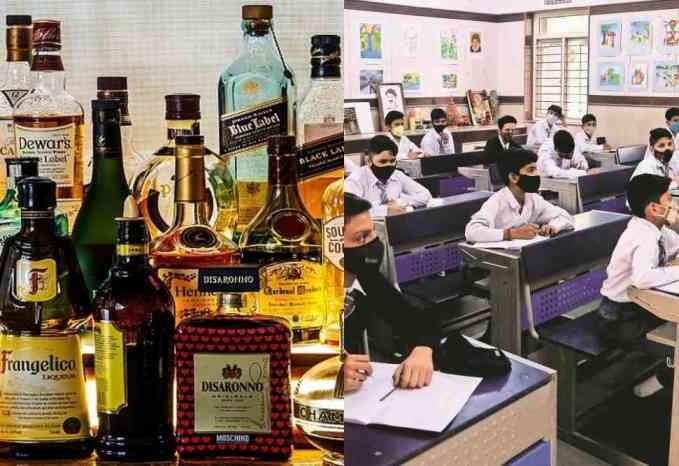 Delhi Liquor Scam Case (Manish Sisodia case) and Education Model of Delhi government are burning topic which even shook Delhi and its politics spectrum. While, these issues and intervention of CBI and ED in the case has raised several questions upon the functioning of political parties and their dark reality. Let’s analyze these internationally acclaimed development models of Delhi.

In May 2021, Kejriwal Government give Nod to Sisodia to make whatever changes in the Liquor Policy but, LG intervened in the matter which eventually forced Kejriwal to withdrew his decision of giving sole authority to Manish Sisodia.

At first, this New Liquor policy was proposed in 2020 when country was in terror of Covid19 and was implemented on 17th November 2021. According to Old Liquor Policy, the liquor shops in Delhi were operated, controlled, and regulated by Excise department of Delhi government but, new liquor policy demolished this old system and privatized the system. Here, only private players have sole authority to manage the liquor system without any government control. This led to closure of all government liquor shops.

The license for holding liquor shops are issued to only those people who are allegedly associated directly or indirectly with AAP government, Excise department, and Manish Sisodia.

According to old liquor policy, it bared liquor company to sell liquor themselves or without any vendor but, this new policy allowed every company to sell liquor as per their interests. In return to that these companies filled pockets of excise officers and ministers with huge lump sum of money as commissions.

This new liquor policy divided Delhi into 32 zones and in each zone 27 vendors were given license. Manish Sisodia gave nod to these vendors to sell liquor on whatever price as suit to them earlier it was regulated by Government thus; vendors started selling liquor at minimum prices and at offers like Buy One Get One Free to boost up the Liquor.

In first quarter of financial year 2022-23, Delhi government treasure has already faced loss of Rupees 1485 crores. The sale of Whiskey and Wine has increased by 60% and 87% but, revenue decreased by nearly 80%. To demonstrate:

Sisodia waived off 144.36 crores worth of License fee to benefit liquor vendors excusing 2nd Wave of the Pandemic. Secondly, this decision was wrong or illegal because it was done without seeking approval of the Cabinet. To demonstrate, Sisodia decreased nearly 50 rupees of Import Pass Fee on each bear case imports.

Manish Sisodia even refunded Rupees 30 Crore to Liquor vendor reportedly near and dear to Sisodia. That Liquor Vendor don’t even had NOC from Airport Authority as his shop was in the Airport premise.

Manish Sisodia extended license of liquor vendors even after it expired numerous times. Sisodia further misused the Approval Note of cabinet to implement his decisions.

In the lieu of benefiting Liquor Vendors, many government officials including Minister in Charge of Excise department are charged.

On July 14, Kejriwal called urgent cabinet meeting to legalize all the illegal documents against Sisodia, even without informing Lieutenant Governor. As Delhi is a Union territory so it’s compulsory for the CM to inform LG before calling a Cabinet meeting.

On 6th August 2022, LG approved the suspension of 11 Excise officers including IAS officers and Excise Commissioner and further directed to start disciplinary action against them. Lieutenant Governor of Delhi directed the probe on the bases of report submitted by Vigilance Committee which insured ‘serious lapses on the part of officers concern.’ CBI registered FIR against 15 people under the Delhi Liquor Scam case including Manish Sisodia, Former Excise Commissioner Aarav Gopikrishnan, and Former Deputy Excise Commissioner Anand Kumar Tewary. Under the same case, CBI carried out raids in 7 states and at 31 locations including Manish Sisodia’s property.

Talking about internationally (NYT and Khaleej Times) acclaimed Education model of Delhi Government, yes no doubt their many encouraging and boosting successes are record in the education system of Delhi but, still there are some loopholes on which government had to work and accept without ego. Understanding Education model with some points:

Manish Sisodia has also allegedly charged under School Construction scam case of Rupees 2000 crores, in this Sisodia used nearly 25 lakh rupees to construct a classroom but a normal classroom costs only Rupees 3-5 lakh. The reports further alleged that around Rs 500 crores are used without passing tender. The government even violated GFR and CPWD work manual in classroom construction. Thus, total money in classroom construction increased by Rs 326.25 crores which is nearly 53% increase.

Additionally, Sisodia has also been charged under Scam of Construction of 7 temporary hospitals during Pandemic times this case is currently in the hands of Anti Corruption Bureau (ACB).

India, known for guiding the world towards the path of righteousness, ethos, nourishing the thought process of other nation by it’s evergreen rituals and followings like promulgating benefits of Yoga. It’s always shameful for a country that has a goal of becoming Vishwa Guru and leading the world not by force but by it’s abundant cultural values.

Delhi is a National Capital thus, errors in the system eventually becomes a national issue. The capital of any country always sets roadmap of development for other states and cities of that concerned nation. The policies and development criteria of a particular nation sometimes influence other nations too therefore, mortifying the system just to gain personal gains even degrades country’s image.