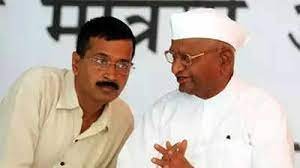 In a letter to Delhi CM Arvind Kejriwal, Anna Hazare reprimanded him and his government’s liquor policy which eventually turned into a scam case well known Delhi Liquor Scam Case. CBI has charged Manish Sisodia as a prime suspect in the case along with other 14 members, which outraged Anna.

In the letter to Kejriwal, Anna said. “Like a liquor, a power to intoxicates a person and it seems you are too intoxicated by power.”

Anna further said, “You had written idealistic things on liquor policies in your book ‘Swaraj’, for which you got me to write the introduction,” he says, quoting the statement that no liquor shops be opened without area residents’ approval. “You have forgotten those ideals after becoming chief minister of Delhi.”

Anna Hazare due to whom Arvind Kejriwal became famous and made his own party, know started questioning Anna’s statement.