https://ifttt.com/images/no_image_card.pngHere's a look at what U.S. Secretary of State...

What is the Cloudy Tail Contrail behind Aeroplanes 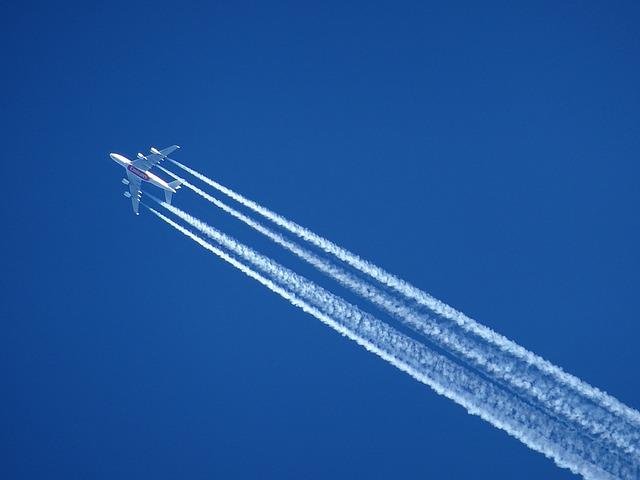 The cloudy tail line behind the areoplanes are generally called Plane’s Contrails. These wispy man-made cloud lines have fascinated humans for a century, but what actually are they?

In 1915, about 12 years after the world’s first powered flight, Austrian physicist Robert Ettenreich was watching a plane circling the skies of South Tyrol when he noticed something—a long, wispy cloud trailing behind it.

Ettenreich described what he saw in a 1919 paper as “a cumulus streak condensation from the exhaust gases of an aircraft”, noting that it was visible “for a long time”.

Airplanes began to reach altitudes leading to the formation of contrails. The others also began to notice the clouds trailing behind the planes. A poetically inclined captain in the US Army Medical Corps described them in 1918 as “some strange and startling clouds—long, graceful, looping white ribbons.” “I have never before seen an airplane writing in white on the blue slate of the sky,” he added.

During the Second World War, militaries tried to avoid contrails because they wanted to avoid visibility of their aircraft – Ulrich Schumann

As this fledgling aviation industry has matured and exploded across our skies, contrails have become an increasingly common sight. Their eye-catching presence has caught the attention of many, thanks in part to the surprisingly common belief in the chemtrail theory (more on that later). However, scientists are actually interested in their climate impact. So what exactly are they – and should we pay more attention to them?

After the first observations in the early 20th century, the exact cause of these trailing clouds remained a matter of debate for several decades, says Ulrich Schumann, professor of atmospheric physics at the German Aerospace Center (DLR). Early theories assumed it was vibrations from an aircraft engine or the effects of electrical charges. Some considered whether they occurred due to supersaturated water vapor, but this was dismissed as too little water vapor was thought to be released.

Determining the causes of contrails did not become a major issue until World War II, when contrails were first seen as a problem. “They make airplanes visible, you can see the trail of a flying airplane,” says Schumann. “So during World War II, militaries tried to avoid contrails because they wanted to avoid the visibility of their planes.”

The first proper explanations of how they formed were derived in the early 1940s and 1950s with what is now known as the Schmidt-Appleman criterion, which shows threshold conditions dependent on ambient pressure, humidity, and the ratio of water to heat released by plane. .

Briefly, contrails—a contraction of “trails”—are line-shaped clouds of ice particles that form in the wake of airplanes. They can be from 100 m (330 ft) to several kilometers long.

Three things are needed to form them: water vapor, cool air, and particles on which the water vapor can condense. Water vapor is produced by airplanes when hydrogen in the fuel reacts with oxygen in the air. In cold conditions (typically below about 40 °C (104 F)) it can condense, usually on soot particles also emitted from aircraft engines, into a mist of droplets, which then freeze to form ice particles. The process is essentially like frozen breath on a cold winter’s day, Schumann says.

A 2016 poll found that 10% of Americans consider the chemtrails conspiracy to be “completely true”, with a further 20-30% considering it “somewhat” true

Not all aircraft produce contrails – they are estimated to occur on about 18% of flights. The air must be cold enough for water to freeze, so they usually only appear at certain altitudes – usually 20,000 feet (6 km).

Even fewer flights create the most permanent contrails. In clear, cloudless air, condensation trails disappear quickly because the dry ambient air causes ice particles to sublimate (change from solid to gas). However, if the atmosphere is moist, the ice particles cannot sublimate and condensation lines can persist much longer.

“Contrails can only last for a few minutes if the surrounding air is dry, but when it’s moist they can persist and spread to increase cirrus clouds,” says Tim Johnson, director of the Aviation Environment Federation (AEF), a UK organisation. non-profit.

This is important because condensation lines and increased cloud cover trap heat radiated by the Earth, leading to a net warming of our planet, he adds. This warming is in addition to aviation’s other significant climate impact – CO2 coming out in huge quantities from its tailpipe, contributing around 2.5% of global CO2 emissions.

In the 1960s, papers first began to appear suggesting that contrails could have a cooling effect on Earth, Schumann says. This occurs because the whiteness of contrail-induced cloudiness reflects sunlight back from Earth’s surface during the day, similar to natural cirrus clouds, which are also made of ice crystals.

However, scientists soon discovered that contrails can also have a warming effect on Earth, through a “greenhouse” effect that traps infrared light. “They capture the heat that is radiated from the Earth’s surface and release some of it back to the surface,” says Schumann. This is similar to cloudy skies creating warmer nights – the clouds above trap some of the outgoing heat, although the condensation lines are not large enough to cause changes in the weather on the ground.

Depending on the exact conditions, one or the other of these opposing effects may prevail. For example, contrails that form over a snowy landscape do not lead to additional cooling by reflecting sunlight because the surface is already white and reflective. Contrails also heat up more at night because there’s no sunlight coming in to reflect off of them, so there’s only a heating effect at play.

Along with the difficulty of understanding the exact atmospheric conditions where contrails form, and the complexity of distinguishing them from natural cirrus once they spread across the sky, all of this complicates putting clear numbers on the impact of contrails on the climate.

But the current understanding is that “on average, across all countries around the world, contrails warm up in more than a year,” says Schumann. The last major paper on the effects of contrails on climate, published in 2020, estimated that the non-CO2 impacts of aviation – dominated by contrails – lead to a tripling of the “radiative forcing” of CO2 emissions alone.

In some ways, this is a tricky comparison because the warming effects of contrails and CO2 occur on very different timelines. “Contrails have a very strong forcing effect, much stronger than CO2. But contrails are short-lived, after an hour they are gone. While CO2 is very long-lived, it can live for 100 years,” says Schumann.

Still, scientists have warned that if no action is taken, the effect of condensation clouds could triple by 2050.

The good news is that this could actually be a fairly simple fix. The researchers showed that only 2.2% of flights contribute 80% of this force, and that relatively small adjustments to the altitudes of these flights – at low fuel costs – could significantly reduce the warming effect of contrails. The formation of contrails can also be reduced by reducing the amount of soot particles emitted by flights, research has shown, as these provide nuclei for the formation of ice crystals.

Avoiding flying through very humid air, where persistent contrails can form, is the most important precaution here, Schumann says, by flying over, under or around these areas. But better weather forecasts are needed for that, he says. “The weather forecasts we have today are not accurate enough for this purpose.”

In a letter to the journal Nature last year, two researchers argued that adjusting flight altitudes to minimize contrail formation could be one of the most effective climate measures. They calculated that preventing the most damaging contrails would cost $1 billion (£850,000) a year, with benefits worth more than 1,000 times that amount. “We know of no comparable climate investment with a similarly high probability of success,” they wrote.

While governments are aware of the climate challenges posed by contrails, little policy action has been taken to date, Johnson says. “The climate targets set for the sector by industry, countries and the UN all relate to CO2 emissions only. The debate over scientific uncertainty and appropriate metrics is often cited as a reason to focus on research rather than action.”

UK government climate change advisers have said more attention needs to be focused on effects other than CO2, such as those from contrails. Considering these effects is now crucial, especially when considering how future technologies such as hydrogen can reduce the sector’s emissions, Johnson says.

Despite the complications, the warming and cooling effects of contrails are well-established science. However, these thin lines hovering above us in the sky have also inspired a theory that isn’t very scientifically based: that they are traces of toxic chemicals infamously sprayed into the atmosphere by tens of thousands of commercial aircraft.

“People who believe in chemtrail conspiracies believe that the contrails are being deliberately sprayed for evil purposes,” says Amy Bruckman, a social computing researcher at the Georgia Institute of Technology who co-authored a paper last year about how they believe in chemtrails. the conspiracy came to be believed. “They have different opinions about what those purposes are. Some people believe it’s population control or mind control. […] A number of people believe their health problems are caused by the spray.”

Chemtrails have made several appearances on social media in the UK this summer, with fact-checking website Full Fact regularly finding itself debunking photos and other claims of or about alleged chemtrails.

The chemtrails conspiracy theory began in the 1990s, but exploded into widespread belief in the early 2000s when it spread across the Internet. “Suddenly in 2001 a lot of people were talking about chemtrails, it was a sudden appearance,” says Schumann. He notes that the chemtrails conspiracy is “completely illogical” — his institute measures emissions behind airplanes and has found no man-made chemical species. “These are all things you can easily understand from burning kerosene. There is absolutely no evidence that chemtrails exist.”

However, this evidence is regularly dismissed by conspiracy theorists. One Schumann colleague who cited his work to a chemtrail believer was immediately told that Schumann was a “made-up scientist” who didn’t exist, he says.

It’s not hard to see why for over a century people have pondered the effect of these slender, man-made lines in the sky. But the real need now is to focus on better understanding – and taking action on – their climate impacts.