Mentions & Status of Transgenders in Sanatana Dharma and Vedic Era

Mentions of Transgenders in Scriptures and texts of Sanatana Dharma such as Story of Bahuchara Mata, Bhagwan Vishu's Maya as Mohini, Ila, Ardhanarishvara, Khujuraho Temple, Bhagvati Devi, Mahabharat and Ramayana 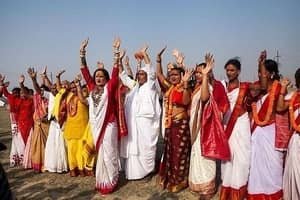 Sanatana Dharma(Hinduism) and its fundamental principles recognize and mention all the genders, e.g. Male, Female, Transgenders and Bisexual, as equal and important.

The prevailing Society treats transgenders with disparity and prejudicially even calls them Chakka, Hijra, Kinnar, but the reality is far away. The transgender person in Sanatana Dharma holds a prominent position and is called as Ardha-Nareshwar and Aravanis. Apart from Indian Society, the Transgender population has also faced exaggerated disparities and disdain in other religions and regions all across the globe.

There are widespread demonstrations in the texts and scriptures of Sanatana Dharma that advocates the seniority and prominence of transgenders.

When Mata Bahuchara was travelling in a Canvas with her sisters, a local Bandit named Bapiya attempted to molest her. But, Mata Bahuchara cut off her breasts and dissuade the bandit Bapiya. Mata cursed the bandit with impotence; on receiving several apologies from the bandit, she decided that Bapiya must dress and behave like a woman to redeem or atone for his sin.

It may be man, queer, woman, plants and animals, whoever worships Me with total devotion, leaving guile, are equally dear to me.

After 14 years long exile, when Bhagwan Shri Ram Chandra returned to Ayodhya, he witnessed some Transgenders living outside Ayodhya. When asked why are, they residing outside the Ayodhya transgender community replied as:

Filled by their devotion, Shri Ram led them into his city Ayodhya and granted them the ability to confer blessings on auspicious occasions like childbirth and marriage.

In Mahabharata (Gita) or Krishna (Dwaparyug):

Shikhandini or Shikhandi was born as a girl child to king Dhrupada but raised as a male child. Dhrupad married Shikandini to princess Dasharna. After several objections by newly wedded wife Dasharna, Shikandini exchanged her gender with Yaksha to Male and became Shikhandi.

The prime motive behind the birth of Shikhandi was to seek revenge for his incarnation as Amba, who was humiliated by Pitamah Bhishma. Shikhandi became fruitful to Pandavas in the Battle of Kurukshetra and successfully made Bhishma sleep on a bed of arrows. Pitamah Bhishma was known to Shikhandi’s identity, so he refused to take weapons in front of Shikhandi; this depicts that even Pitamah Bhishma respects transgenders.

Aravan and Mohini: Aravan was the son of Mahabharata legend and third Pandava Arjuna and Naga queen Ulupi. According to Peruntevanar’s Parata Venpa, a Tamil version of Mahabharata, Aravana performed a sacrificial ritual in the Kurukshetra war by sacrificing himself before Goddess Kali, popularly known as ‘Kalappali‘. It was affirmed at those times that the one who performs this ritual would ensure victory for his side.

Aravan presented his three boons, and the third boon was that he wanted to marry as his last request. After receiving rejections from every kingdom and lady, everyone was worried that their daughter would spend the rest of her life in widowhood. Bhagwan Krishna agreed to marry him in Mohini’s incarnation, spend the whole night with him, and then mourned the death for the next 13 days and fulfilled all the rituals of a wife. Hence, transgender people are also known as Aravanis and assume Aravan as their husband and mourn his death as prescribed by the rituals.

Arjun as Brihannala: When Arjuna went to Indralok to seek Divyastra, Apsara Urvashi presented her wish before Arjuna to marry her, but Arjuna called her mother, Urvashi left scorned after many attempts and cursed Arjuna to become a eunuch for the rest of life. On Devraj Indra’s request, Urvashi decreased this sentence to one year, and Arjuna used this sentence while residing in Virat’s palace as performing exile (Agyatwas).

As already stated above, Ardhanarisvara (half male

half female) is a term in Hindu Sanatana Dharma, depicting the principle that Male has traits of Shiva and Female have traits of Parvati but, transgender people are privileged by both hence called Ardhanarisvara.

The depiction of Shiva and Parvati in Ardhanarishvara form was recovered in Kushan Era. Ardhanarishvara symbolizes the inseparability principle between the male half on the right as Purusha (Bhagwan Shiva) and the female half on the left represented as Prakriti (Devi Prakriti). This divine confluence of Ardhnarishvara represents our oneness and belongingness towards transgender people and affirms that all species are under a single sphere.

Devi Durga killed demon Mahishasura, frustrated Mahisi, undertook severe penance of Bhagwan Brahma and demanded a boon that she would only be slain by the son of Hari (Bhagwan Vishnu) and Hara (Bhagwan Shiva). Being under the illusion that how is it possible for Hari and Hara to consummate, she became over-confident about her immortality. As Devi Parvati (Narayani) was the sister of Bhagwan Vishnu (Narayana), Devi Parvati gave her beauty to Bhagwan Vishnu and eventually, Bhagwan Vishnu became Narayani. Though procreated Ayyappa with Bhagwan Shiva, Ayyappa killed Mahishi and helped her attain emancipation.

During Samudra Manthan, Bhagwan Vishnu again used his Maya of Mohini and drew the attention of Asura’s by her illusionism that maddens the lovers. Devta’s utilized the opportunity emptied the pitcher of nectar obtained from ocean churning (Samudra Manthan).

The dreadful terror of Demon Bhasmasura was at its peak of cruelty as Bhasmasura attained a boon by performing severe penance of Bhagwan Shiva and Shiva granted him a boon that he can turn anybody into ashes by touching one’s head. To test the boon given by Bhagwan Shiva, Bhasmasura decided to convert Bhagwan Shiva into ashes but, Mohini confronted him. With her immense beauty, she made Bhasmasura touch his head, resulting in the conversion of Bhasmasura into ash.

Story of Ila or Sudhyumn:

Sudhyumn mistakenly entered the cursed (by Shiva and Parvati) forest and eventually became a woman. She has transformed into Ila again; she married Budha or Mercury and gave birth to Pururavas.

While complaining about the incident that happened to her in the cursed forest to Sage Vasishta, Bhagwan Shiva descended and mitigated the curse. Bhagwan Shiva gave her the boon to operate as a male every alternate month, and for the rest of the months, she will remain as a female.

Other Illustrations of Transgenders from divine Sanatana Dharma:

The series of Khajuraho Temples demonstrated the legality of Gay sex, male to male sexual intercourse in scriptures and remnants referring towards Sanatani culture.

Bhagavati Devi is also considered an epitome of cross-dressing culture in southern India. Around 5000 male devotees dress like women every year for the Chamayavilakku festival’s ritual in Kollam.

Consequently, the Illustrations presented by the Sanatana Dharma are enough to accept and respect the Transgenders and their faiths, beliefs and life structure. Due to widespread fallacy, these LGBT people are still facing a lot of ostracism and prepossessions.

According to the Sanatana Dharma, people must live peacefully and let others live peacefully. This dogma of favouritism or bigotry is not suitable for a peace-loving society. Sanatana Dharma recognizes that all species on this earth have rights over their bodies and pleasures as pleases to them but must not be contrary to societal principles, norms, and law.