Maharana Pratap, resistance against Invading armies of Mughal in Battle of Haldighati, Battle of Dewair and Siege of Chittorgarh 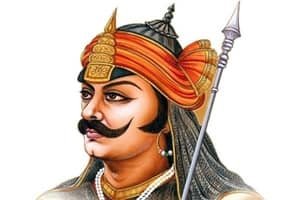 Pratap Singh I, popularly known as Maharana Pratap, was a renowned Rajput Warrior and the first freedom fighter of the Nation. Maharana Pratap stands as an Idol for the whole country and is revered for his courage, fearlessness, valour, and Sacrifice for his people. Pratap Singh gallantly fought against the mighty forces of Akbar in the Battle of Haldighati and Battle of Dewair.

On May 9, 1540, Pratap Singh I was born in Kumbhalgarh fort as the eldest son of Rana Udai Singh II and Maharani Jaiwanta Bai. He had ten wives, including Ajabde Punwar, his first and the most favourite wife from Bijolia and had seventeen children. Ajabde Punwar was a love interest of Pratap Singh and married the rest of his wives only to strengthen the bond with several other Rajput rulers to fight against the Mughals.

Maharana Pratap was a shadow of Rana Sanga (Sangramsingh) on the Battlefield. Rana’s Of Mewar were one of the pledged rivals of the Mughals as they didn’t want to surrender by sacrificing their dignity. The Mewari were obedient to their motherland to protect it from the invaders like Mughals and Khilji.

In 1572, during the demise of Rana Udai Singh II, one of his prominent wives Rani Dheer Bai, insisted him to make Jagmal Singh ruler of Mewar, but the senior Courtiers felt that Pratap Singh would be a better choice to rule the Kingdom. Maharana Pratap ruled Mewar for around 25 years and is recognized as the 54th and one of the great rulers of the Sisodia Dynasty.

Maharana Pratap was undoubtedly a great ruler but was a fine administrator too. He was popularised as the light and life of Hinduism and the Hindu Community under those severe circumstances when Nation was plagued by Foreign Islamic bigotry and fundamentalism. He was so benevolent towards his subjects, and at the time when he was residing in the Jungle along with his ministers, he used to eat Bread made from a grass (Ghass Ki Roti) along with his followers. The administrative unit of Pratap Singh was very enthusiastic and passionate about their work, including Jhala Maan Singh, Hakim Khan Soor, Bhilu Raja, and Bhama Shah.

“Time is so strong; it can even let the king eat grasses.”

Maharana Pratap Singh was inquisitive in religion, art, architecture, and creative work. His architectural achievements were Ubheshwar, Chavand, Kamal Nath, and under his guidance, the beautiful city of Udaipur was made in the name of Udai Singh II. He was a benefactor of the art of Padmavat Charita, and poems like Dursa Ahada were commemorated during his reign. He was a great devotee of “Mahadev” (Eklingji), a famous temple near Kumbhalgarh, Rajasthan.

Pratap Singh respected every religion, following, and ideology in his Kingdom. His primary focus was to make his Kingdom a “Ram Rajya” where no one is deprived of their rights and prejudiced on any basis.

When his son Amar Singh I captured a woman from an enemy camp as a hostage, he immediately sent her back and reprimanded his son over the incident, conveying the mindset and principles of Sanatana ideology followed by Maharana Pratap. It is also said that when Abdur Rahim Khan-e-Khana got to know about this incident, he got filled up with respect towards the Maharana Pratap and called off his forces as he was earlier planning to attack him.

Maharana Pratap and his love for animals:

Another notable chapter of Maharana Pratap’s life is embedded into the minds of people as their love for animals. Pratap Singh had a horse named Chetak and an elephant Ramprasad. It is also said that no one even dare to ride Chetak except Maharana Pratap.

Chetak is recognized as a symbol of loyalty in the Battle of Haldighati, where Chetak got severely wounded as the elephant’s tusk tore the Chetak’s leg and crippled it. But he didn’t give up as his master was in danger, and to save his master, he crossed a river(width-wise) in only a single jump(only three legs were functional) and collapsed.

Ramprasad, an elephant of Maharana Pratap, was also very strong and obedient to his master. Ramprasad solely killed 13 elephants of Mughal forces in the Battle of Haldighati and later was captured by the Mughal force as Akbar wanted that elephant to be in his force and given a lot of sugarcane and a heavy diet, but Ramprasad martyr without eating or drinking anything for 18 days as the elephant didn’t want to betray Maharana Pratap (true master).

In the bloody Siege of Chittorgarh in the year 1567-68, where Rao Jaimal, Patta Sisodia, Kalla Rathore, and Sahib Khan sacrificed their life against the cruelty of Mughal Emporer Akbar were, around 7,000 Mewari Soldiers killed and women of those martyrs committed Jauhar (self-immolation) in front of the mighty force of around 80,000. After winning the war, Akbar entered the Chittorgarh premise and resulted in a brutal massacre by killing 28,000 innocent lives, including many women who were raped and murdered, and several others were forcefully converted and persecuted.

Like his ancestors, Akbar also made his move towards promoting Jihad, which resulted in persecution, forceful conversion, molestation, rape, murder, and demolishing several monuments, temples and Educational Institutes during his reign.

Former Prime Minister of India Atal Bihari Vajpayee also presented his views upon Akbar’s siege of Chittor and false glorification of a tyrannical, despotic ruler Akbar as The Great. He says:

In order to avenge the massacre at Chittorgarh, Maharana Pratap rebuilt his military with prominent leaders like Hakim Khan Soor, Rana Ponja, Jhala Maan Singh and announced open rebellion against the Mughals. This results in the Battle of Haldighati.

Battle of Haldighati was held 100 KM away from Udaipur, the Haldighati was a one KM narrow pass or the entrance point at the Aravali Mountains and is a bit advantageous to the Mewari’s that’s why Mughal forces stopped approaching forward.

In the battle, Maharana Pratap, with 3000 soldiers and Mughals with around 25,000, began the fight, which shows the excellence of Maharana on the Battlefield by cutting down Bahlol Khan along with his horse in two pieces. Several Mewari and Bhil brothers made sacrifices in the battle, including Hakim Khan Soor, Ramshah Tomar, Shalivahan Singh Tomar, and others. The betrayal by Mewar prince Shakti Singh (Brother of Pratap Singh) is another reason why Mewar couldn’t be able to maximize victory, and the war ended inconclusively.

In order to retake the throne, Maharana Pratap, along with Bhama Shah and Bhil brothers, attacked the territories of Mewar under the Mughal rule. In the Battle of Dewair,  Maharana retained everything (36 regions) except the Chittorgarh fort. This war made Akbar frightened of Maharana, and as a result, he stopped his campaign against Mewar.

Maharana Pratap left the world for the heavenly adobe on January 19 1597, at 56. It is believed that he was suffering from a fatal injury that he got while saving his son Amar Singh I from the attack. His eldest son Amar Singh I succeeded him to the throne. It is also stated that even his arch-enemy, Akbar, cried over his demise and bowed towards his panting. This instance seems to be a drama by Akbar, only to pretend his image as secular or liberty friendly, and another catchy point is that this thing is only written in Akbarnama, which Akbar itself directed.

Check out more posts on Conversion and Persecution in India: