https://ift.tt/nqeD8ld star Brittney Griner is at her... 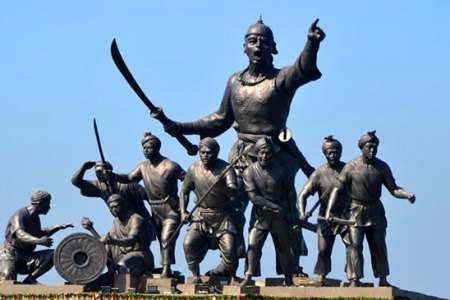 History taught us about the deadliest period for Mughals (invaders); we remember several names, but when it talks about the Battle of Saraighat, a synonym of unbeatability and invincibility cracks our mind is Lachit Borphukan. Lachit Borphukan was a commander and Borphukan of the Ahom Kingdom renowned for defeating the monstrous forces of Mughals under Aurangzeb, commanded by Mirza Raja Ram Singh I. People of the Assam and the whole nation celebrate the valiance of Lachin Borphukan as Lachit Divas on 24th November.

Lachit Borphukan took birth in Tai Ahom Family and embraced the whole province of Assam. Lachit was born to the first Borbarua and commander-in-chief of Ahom Army Momai Tamuli Borbarua and mother Kunti Moran in Charaideo on 24th November 1622. He was initially named Lachit Deca. He grew up following the ideals of his father and mother, acquired proficiency in the scriptures, humanities, and moral etiquettes and mastered the warfare tactics which structured him into a visionary and proficient leader.

In the struggle to become Borphukan or Commander-in-chief of the Ahom army, Lachit went through several posts with the same determination to serve the Kingdom. Lachit served as Superintendent of the Royal Horses or Ghora Barua, Commander of the Strategy at Simulgargh Fort, superintendent of Royal Household guards or Dolaksharia Barua and scarf bearer or Soladhara Barua in the Ahom Kingdom. Under the Ahom Raja Chakradhwaj Singha, also known as Supangmung, he was regarded as the Borphukan and Commander in chief of the Ahom Kingdom.

Story behind why Lachit Killed his Uncle:

The times were so cruel for the Kingdom of Assam and their people due to the barbarism of Humongous Mughal forces in Assam. Lachit Borphukan ordered and employed his maternal Uncle as a supervisor for the construction of the earthen wall for the fortification within one night.

While inspecting at the late-night, Lachit found that progress is not that satisfactory. Lachit, while sorting the explanation from his maternal Uncle for the delay in the work, talked rudely and cited the drowsiness issue. Lachit inflamed and beheaded his maternal Uncle for unprofessional behaviour towards the Kingdom or country during harsh times. As stated, the earthen wall’s construction should be completed within the night. Later, it was named “Momai-Kota Gargh.”

It is also believed that Lachit was very close to his Uncle. After beheading him, Lachit said,

“My Uncle was not greater than my motherland.”

Lachit Borphukan was an able strategist, combatant, and leader. He served his King and motherland through mind-boggling warfare tactics. He has mastered terrain strategy, clever diplomatic measures, phycological strategies and guerilla warfare. Lachit was also credited for re-capturing the Guwahati from the monstrous forces of Mughals.

Maharaja Chrakradhwaj Singha awarded a sword of Golden Handle called Hengdang sword and customary paraphernalia of distinction to Lachit Borphukan for his excellence and brilliance in a test conducted by Ahom Raja to test him. Lachit impressed not only the Maharaja of Ahom Kingdom but was also very famous in the common public as a leader, patriot and reformer.

The oppressive Mughal forces of Aurangzeb marched towards the Ahom Kingdom, commanded by Mirza Raja Ram Singh I. The Mughal Army was humongous and high tech but, in terms of spirit for the motherland, they were lacking in front of Ahom’s. With carrying a motive of capturing the Assam province, the force consists of 36,000 troops, nearly 20,000 archers and shieldsmen, 18,000 Turkish Cavalry, 5,000 gunners and a thousand canons.

The Battle of Saraighat is also considered the greatest naval battle of Indian history which took place at the Brahmaputra River. Both the forces clashed with each other; Ahom’s were less in number but were empowered due to Lachit, whereas the strong and vast Army of Mughals were frightened of Lachit Borphukan.

At the beginning of the battle, an arrow was fired on the Assamese Army, carrying a letter by Ram Singh to Lachit. The letter offered Lachit one Lakh Rupees to evacuate the Army from the battlefield and surrender Guwahati. Lachit fulfilling his duty towards motherland turned down such a huge amount and chose to fight. Maharaja Chrakradhwaj Singha gone dubious over Lachit when they heard that the offer presented by Ram Singh is so huge. Chief Counsellor Atan Borguhain convinced the King that it was just an experiment against Lachit and his loyalty.

In the battle, Lachit got severely injured by the Mughal forces, which also diminished the Ahom Army’s morale, and many abandoned the battlefield. As the Lachit was the only hope for the Ahom kingdom in this battle and no other commander had the potential to restrict the Mighty Mughal forces. Grievously injured, Lachit stood firmly against the opposite side and bugled the words to the Army:-

“If you want to leave the battlefield then you are free to leave it, but despite my severe injuries, I will fight till my last breath. Go back and tell Maharaja Chradhwaj that I fought firmly until I received martyrdom.”

These words of Lachit had an electrifying effect upon the Army and resulted in the decisive win for the Ahom Kingdom. Lachit became a heroic figure not only for Assamese but all over the country.

Therefore, the invincibility of this jewel of the Assam and the whole nation is intact even after four centuries. The ideals and principles of Lachit Borphukan are still inspiring and leading us on the path of truth, humanity and nationalism. These epitomic figures and their sacrifices are erased from our history books. Preserving the heritage, cultural values, and ethos is our duty, as this leads us on the path of righteousness.

Seoul responds to North Korean warplanes near its border