Speaking ahead of a meeting of North... 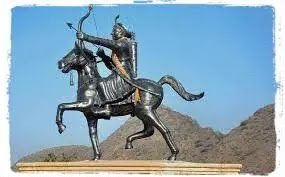 Prithviraj Chauhan, also known as Rai Pithora, was a ruler of the Chauhan Dynasty or Chahamanas of Shakambhari. The ruler who defeated invader Ghurid Muhammad Ghori around 17 times and powerful Hindu King Jaychandra of Kanauja is revered as Akhand Hindu Samrat Prithviraj Chauhan. Prithviraj Chauhan advanced his Kingdom to many parts of present-day Uttar Pradesh, Rajasthan, Haryana, Punjab, and Madhya Pradesh under the Capital City Delhi and Ajaymeru (modern-day Ajmer).

Prithviraj Chauhan was born on the 12th day of the Jyeshtha month, Vikram Samvat, in 1166 and blessed the Chauhan King Someshwar Chauhan of Ajaymeru (modern-day Ajmer) and Karpuradevi princess of Kalachuri kingdom. Someshwar emphasizes the value of education equal to the ware-fare tactics like archery and sword to his child. Thus, with this progressive approach of “Shastra and Shashtra,” it is said that Prithviraj Chauhan mastered around 14 languages and some of the prominent subjects, which includes painting, mathematics, medicine (Ayurveda), and philosophy (Mimamsa).

Accession to the throne:

Someshwar Chauhan died in the battle in 1177, and as a result, 11 years old Prince Prithiviraj Chauhan inherited the throne under his mother Karpuradevi’s guidance. Kaimash, Kaka Kanha and Bhuvanaikamalla were the prominent ministers of Prithviraj’s administration and served him in the most significant wars and in taking administrative decisions.

Prithviraj Chauhan assumed total control of the administration of the Kingdom at the very young age of 14 years, and her mother acted as a regent. The bravery, maturity and intellectuality of Chauhan satisfied her mother to believe in him as a king.

Love Interest and Conflict with Jaychandra of Kannauj:

The love story of Prithviraj Chauhan and Samyogita (Princess of Kannauj and Daughter of Jaychandra) is very famous among youth; that some depicts them as two bodies, one soul. The major obstacle in their path was Jaychandra (father of Samyogita and father-in-law of Prithviraj), who wanted to take revenge from Prithviraj by overtaking him from Delhi’s throne. Raja Jayachandra of Kannauj was greedy towards the Crown and Wealth.

Jayachandra conducted a Rajasuya Ceremony to prove his supremacy among all, which Prithviraj denied participate, that depicts refusal to accept him as the most powerful king of the Bharat (India). In order to take revenge, Jayachandra organized the Swayamvar for her Daughter Samyogita and didn’t invited Prithviraj Chauhan.

Along with around a hundred warriors, Prithviraj Chauhan conquered the city of Kannauj and married Samyogita after defeating Jayachandra and his allies in the Swayamvar. This incident proved to be a shameful event for Jayachandra, weakening his power and supremacy in the surrounding region. Jayachandra resulted his move in opting the path of betrayal to the motherland by shaking Hands with Ghurid King Muhammad Ghori.

Military Career and Expansion of Empire:

Prithviraj Chauhan was a great warrior, and due to his valour on the battlefield, he had not even hesitated to conquer the more powerful Kingdom than his own. Prithviraj Chauhan is known for his compassionate nature towards those who accept his supremacy and defeat. His priority was not to kill any ruler in place of that, he used to liberate them or imprison them if the situation worsen in the future.

Prithviraj had a conflict with the majority of the rulers as they didn’t want any young boy to govern or rule. Prithviraj Chauhan led several campaigns against the Nagarjuna, Bhadanakas, Chandelas of Jejakanbhukti and the Chaulukyas of Gujarat and attains victory over all.

Prithviraj also protected the Indian land around 17 times against the foreign invader Muhammad Ghori. Prithviraj failed Ghori to attain his desire of capturing India. The main fault of Prithviraj was that he liberated Muhammad Ghori whenever he invaded, and as a consequence, he lost the 18th battle with him when Jayachandra betrayed his son-in-law and his motherland by joining hands with the mighty forces of Invader Muhammad Ghori.

Final Battle with Ghurid’s and death of Prithviraj Chauhan:

The Ghurid forces used to invade the Indian territories to loot, persecute, convert, rape women, and demolish temples and religious places. At the request of several kingdoms, Prithviraj fought several battles against the Ghurid forces led by the Muhammad Ghori to protect his religion, motherland, and people. In around 17 battles, Prithviraj succeeded in defeating Muhammad Ghori and made Ghurid troops retreat.

The war between the Chauhan’s and Ghurid’s lasted long enough and caused tension in the Ghurid army, whereas the Muhammad Ghori decided to defeat and enslave Prithviraj as a prisoner at the Ghazna to avenge his continuous defeats.

During the Second Battle of Tarain, the Ghurid forces under Ghori and Kannauj forces led by Jayachandra allied to defeat their common enemy, Prithviraj Chauhan. The Ghurid forces attacked the Chauhan army at night while they were resting and gutted the military into the fire with the help of Jayachandra. The incident resulted in the seizing of Prithviraj Chauhan and Chand Bardai, taking them to the Ghazna after destroying Ajaymeru, dismantling temples, and performing mass killing and rapes of the people of Bharat.

Jayachadra, after this incident, becomes a symbol of a “traitor” in Hindu scriptures. According to “Prithviraj Raso,” at Ghazna, when Prithviraj refused to accept Islam, he was heinously beaten and tortured; he was made blind by penetrating hot iron rods. Chand Bardai urged Muhammad Ghori to give Prithviraj Chauhan a chance to entertain the court. Muhammad Ghori accepts the offer and makes Prithviraj enter the court premise and show his excellence in archery.

Also Read: Forced Religious Conversion and Persecutions in the India

Therefore, the legacy of Prithviraj Chauhan taught us about the spirit and dedication of serving the motherland in all possible ways. Chauhan put his whole life serving his people, religion, and nation. The illustrious life story of Prithviraj Chauhan inspires and trigger us towards the feeling of patriotism and people’s welfare.

Boxer sent through the ropes in shocking KO (VIDEO)