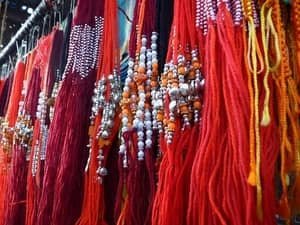 The red thread known as Mauli or Kalava is a sacred thread tied on the wrist before the start of any Hindu sacred ceremony. Mauli is used for many religious purposes and symbolizes the shower of holy blessings. There is also a popular belief that with the blessings of the deity the sacred red thread protects a person from diseases, enemies, and other dangers.

Since ancient times, priests believe that our entire body is controlled by the wrist nerve. So if we tie Mouli on the wrist, it helps in controlling the blood circulation of the body. Wearing Kalava in hand to ward off negative energy or evil spirits.

The mantra recited by Pandit Ji while tying the sacred thread is:

The thread can also be called Raksha or Rakhi and is placed on the brother by the sister to show the family love of the sister. It is said that the knots in the thread capture the love of a sister when she ties the knot. Thus, the brother wears a rakhi as a token of his sister’s love and wishes for protection.

In other arrangements, rakhi ties such as red strings given to guests or tied around their wrists before a special ceremony or reception are also believed to keep the goodwill of those who offer it.

The literal meaning of Mauli is ‘the top’. The reference here is to the head that is standing high. Shiva is called Chandramouli because of the moon on his head.

On the other hand, we get knowledge from Saraswati, prosperity by the grace of Maa Lakshmi, and power from the grace of Maa Durga. During a war in the Mahabharata, Kunti tied a red thread (Mauli) on Abhimanyu’s right wrist as a shield of protection.

No warrior could defeat Abhimanyu. However, it is only when a rat gnaws on the thread that its protection is lost and it dies.

According to Human Anatomy, there is a network of nerves in our wrist. Almost all prime veins pass through here. By tying the thread of Mauli, blood circulation is better, due to which the tridoshas i.e. Vata, Pitta, and Kapha are balanced. As a result, there is no disturbance in the body system.

A person wearing Mauli is protected from fatal diseases like paralysis, diabetes, heart disease, etc. According to acupressure, when you wear Mauli on the wrist, there is no softening of blood which keeps your immunity strong and fit.

According to science, it is very good to tie Molly on the hand as it controls the tension of the veins. It can also be helpful in removing tridosha. It is very beneficial for our health as it cures many heinous diseases.

Wearing Kalava has religious significance as well as scientific significance. At the same time, the tradition of wearing it on religious occasions is going on since ancient times.

Wearing Mauli or Kalva or Raksha Sutra in auspicious works gives God’s grace. It drives away negative energy and defeats your enemy. At the same time, it also keeps your enemies away from you.

This Kalava or Raksha Sutra made of raw thread is found in yellow or green color apart from red but wearing it in red is considered more auspicious than other colors.

We know that Sanatan Dharma is a very old religion under which there are many beliefs and customs which people follow since time immemorial. Tying Mauli in the hand is also an old belief of Hinduism, under which there are many threads that protect our bodies from evil spirits. In this article, I explain the various Threads in Sanatan Dharma and their importance in our lives.

This traditional practice is still followed in all Hindu homes today. Moltadu is a thread that is not as sacred as the Upanayana thread but is considered as a sign of protection. The Hindus of Tamil Nadu named the thread Aragnan Kairu, which is believed to be tied around the waist of boys and men.

Hindus use black and red thread to tie around the waist. Metals like silver or gold are also used by the Hindus of Tamil Nadu in the form of Moltadu thread. Not only boys used to tie molatadu, but female babies also intend to wear the thread till puberty.

This is the hallmark of married women so women used to wear thali or mangal sutra. Apart from social identity, Hindus also believe in the mythological importance of wearing a plate. In addition to the scientific significance, values were added in relation to the plate. Coming to South India, the identity of the thali varies between caste distinctions. Especially in Tamil Nadu, each caste has its own design and symbol of the plate.

According to Hindu beliefs black color is a symbol of pessimistic ideologies As per astrological views, black-colored objects ward off the attention or evil vibes. The main purpose of the black thread is to ward off evil spirits and protect against negative energies.

Moli in worship or prayer

During the wedding ceremony and related rituals, the Mauli is tied in the form of a knot by the married holy priest with the hands of the groom. In return, the groom will tie the same sacred thread to the bride’s left hand, which is one of the rituals.

Other similar occasions, for example, involve the tying of a red-yellow thread on the brother’s wrist by his sister. The occasion is Raksha Bandhan and is celebrated even today to develop a mutual bond and bond between the two.

The sacred thread worn in number three, especially for men or boys, is the janeu or janjemu. The term is coined as Upanayana and originated in the childhood stage of boys.

Some important things in mind, tie Molly in hand