https://ifttt.com/images/no_image_card.png“I pumped my fist a bunch of...

Birsa Munda: Shield of the Tribal movement in India 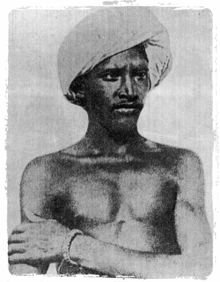 Birsa Munda was a freedom fighter and grassroot tribal leader who fought against British Colonialism. The British imperialism resulted in the assault of lakhs and lakhs of the tribal population, resulting in Munda’s origination. Munda shielded the rights and liberties of the tribal people against the oppressive British Raj and therefore given the title of Bhagwan (God) Birsa Munda.

The glory and splendour of Birsa are remarkable because the virtue of the fact is that Birsa became the leading figure of the tribal population in a tiny life span of 25 years. Against the monstrous British Rule, Birsa rise as a hope for the tribal people.

Birsa Munda was born on 15th November 1875 in the Ulihatu village at that time Bengal presidency (presently Khunti district of Jharkhand). Munda was born to Sugana Munda (father) and Karmi Hatu (mother) and spent his early years travelling from one village to another. Jaipal Nag taught Birsa Munda at Salga. The family spend their lives finding wages and jobs from one place to another.

Birsa Munda was studious and affectionate towards gathering knowledge. He was forcefully converted to Christianity and got admission to the German Mission School. After a few years, he left the German Mission School and Christianity after questioning the Jesuits about why imparity with Munda Sardars. Birsa even criticized the Church system for performing forced religious conversions and levying heavy taxes.

Birsa Munda started its new ethnic tribal traditional religion and propagated the idea to the tribal communities and people. Birsa Munda adopted the elements of Vaishnavism and Mundari to find his religious identity. The Mundas, Oraons and Kharias of the Barwari and Chechari region became convinced by the thoughts of Birsa of promoting their own cultural and ethnic identity. Soon, Birsa became a saintly figure to the tribal people, and people are even believed to have come to seek his blessings.

Birsa explores the principles of Hinduism from a Vaishnav monk who has been with several Hindu texts, including the Gita, Ramayana and Vedas. He wants to make a peaceful society that advocates the concept of love and peace. Eventually, people started seeing him as a healer, preacher and miracle worker. He even emphasized the prayers. Birsa reunited those who were converted into Christianity forcefully or by greed. He made people work on virtue and morals, not based on desire.

Birsa called himself “Dharti Aaba” – Father of the land, and due to faith in him, everybody in the region started chanting the slogans of “Dharti Aaba” which shook the foundation of the British Raj. As the time elapsed, the most of tribal communities and people started following the Birsaities.

British Colonialism and imperialism became a big headache for the Millions of Indians, and along with them, the small portion of the Tribal population was also affected by this Hegemony. Birsa Munda fought against all the disparities imposed by the oppressive British Rule on tribal people.

The British Colonial System alienated the tribal people and farmers from their land rights and allotted those rights to the landlords and Zamindars loyal to the British. This process snatched the lands of farmers and tribal people from them and forced them into bonded labour. The exploitation of the tribal population and farmers was at its peak during those harsh times.

As we all know, harsh and difficult times lead to the origination of strong people, and such strong people change the situation into a favourable one. Birsa Munda was the one who raised the voice of exploited ones and demanded the land reform bill from the British Government.

Birsa Munda’s slogan, which threatened the whole British Raj, was;

“Raj Setar jana, Maharani raj tunda jana” that means “Let the kingdom of the Queen be ended, and our kingdom be established” at those times; this slogan shook the foundation of the British Raj in the whole nation.

First, under his leadership, he constituted the army and performed several guerrilla warfare tactics against the British Raj. The revolt of the Tribal community under Birsa stifled the British’s nose and diminished their fear in the eyes of the public, which led to more uprisings in the country.

Birsa Munda was Jailed regarding the protest on 24th August 1995 for a period of 2 years and was released on 28th January 1998. After his release from prison, he further intensified the uprising and attacked the several loyalties of the British Raj. Birsa held several Guerilla warfare attacks to force British Raj. British Raj puts a reward of Rs 500 on Birsa Munda’s arrest.

On 3rd February 1900, Munda was arrested by the British Police in the Jamkapai forest of Chakradharpur. Around 400-500 tribes were also detained along with him. On 9th June 1900, Birsa Munda was found dead in jail. The suspicion over Munda’s death created mass agitation and riots in the country. The country was filled with anger which created havoc for the British Government.

The uprising and revolt in the country forced the British Government to enact the Chotanagpur Tenancy Act, 1908, which restricted the Adivasi from selling their land to Non-Adivasi people. Hence, the scarifies of tribal leader Birsa Munda secured Adivasi’s lifetime rights over their land, which is why Adivasi still worships Birsa Munda.

Consequently, the sacrifice of Jannayak Birsa Munda at the young age of 25 made him immortal in the heart of Indians. The legacy of Birsa Munda is still remembered as a piece of Heritage in Odisha, Bihar, Jharkhand, Madhya Pradesh and the West Bengal region even after much manipulation in History.

Court in US rules on letting non-citizens vote

Why Martin Short Loves To Play the Self-Absorbed Narcissist