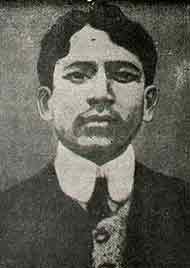 Madan Lal Dhingra was an epitomic freedom fighter, country lover, and revered for assassinating British Officer William Hutt Curzon Wyllie; whom the company referred to as the Eye of the Empire in Asia. Dhingra joined hands with famous revolutionary and Independence leaders like Shyamji Krishna Varma and Vinayak Damodar Savarkar through India House and Abhinav Bharat Mandal. Madan Lal Dhingra is catalogued under the list of revolutionaries who triggered the spirit of Swarajya from abroad.

Madan Lal Dhingra was born on 18th February 1883 in a Hindu Punjabi Khatri family of Amritsar, Punjab, to Civil Surgeon or Chief Medical officer Dr Gitta Mal Dhingra. Dhingra family was moneyed, educated and were also recognized among British loyalists. Madan Lal was the family’s youngest child and was guided to respect and acknowledge the British since childhood. Due to the immense influence of the Dhingra family among the British, the seven lads of the family studied at the prestigious colleges in England.

At first, Madan Lal enrolled in MB intermediate college, Amritsar, and then transferred to Government College University, Lahore, to pursue a Master of Arts. Dhingra got involved in nationalist activities during his college days at Lahore and joined the Swadeshi campaign. Dhingra led student protests propagating the views of Swadeshi and Swaraj.

Madan Lal led the campaign against the British over Swadeshi clothes and refrained from using the cloth made in Britain. Thus, Madan Lal was expelled from the college. Madan’s father, Gitta, directed him to apologize before college management and banish the protest, which Madan denied. Gitta Mal had an inferiority complex towards Swadeshi and Swaraj as he was against all these notions of freedom, protest and Independence from the British.

After the incident, Dhingra refrained from going home and decided to take his life forward by living on his desires. Madan Lal started working as a clerk, factory labour and other low-level jobs on different temporal to carry out his revolutionary activities. The worried family members and elder brother Dr Bihari Lal compelled Madan Lal to move to Britain to pursue mechanical engineering at University College, London, along with his other brothers.

After numerous terrifying and inhumane decisions by the British government to demonstrate the Partition of Bengal in 1905, the death penalty of Khudiram Bose, mishandling of famines, loot of Indian treasury to Britain and manslaughter, the outraged Indians, along with several freedom fighters, carried out protests. Madan Lal Dhingra and VD Savarkar also started student protests against the bigotry of British rule.

In 1906, Madan Lal Dhingra arrived in Britain to pursue medical engineering after being compelled by his family. But, destiny has chosen something different and historic for him. While pursuing his career, Dhingra contacted Shyamji Krishna Varma and VD Savarkar and impressed them with his tenacity and Patriotism. The bunch of revolutionaries started meeting at India House at Highgate to discuss further strategies to make the country independent of British imperialism and fanaticism.

Madan Lal joined a secret group named Free India Society led by VD Savarkar. However, the companions of the society started suspecting Madan Lal Dhingra due to his father’s friendship with Curzon Wyllie, the immense wealth of the Dhingra family and the education of Dhingra at the University College London. Their doubt further deepened when Dingra joined Indian Association and Aristocratic Club (British Friendly organization), but VD Savarkar defended the loyalty of Dhingra towards his mates and Motherland.

William Hutt Curzon Wyllie was a political advisor of Secretary for the State of India at the India Office and had complete control over the doings of East India Company and the British Government. Thus, Curzon Wyllie was, directly and indirectly, responsible for Britisher’s tyranny, manslaughter, and looting of the Indian treasury over Indians.

Madan Lal Dhingra was failed by the local Police to commit suicide and thus arrested.

During the trial, he represented himself and stated that Curzon Wyllie’s assassination was an act of Patriotism and was not intended to kill Doctor Cawas Lalcaca. When asked about the reasoning behind the murder of Curzon Wyllie, Madan said everything you want to know is written in a letter placed inside my trousers. British demolished the letter to suppress the truth of British Cruelties, but one day before the pronouncement of the death penalty, the imitated copy of the letter got viral through the Daily News newspaper. The letter was leaked by VD Savarkar along with his British friend, working in Daily News. A part of the letter reads as:-

He even demanded the death penalty for him, graciously thanked the Judge after the verdict and said:-

MK. Gandhi condemned the actions of Madan Lal Dhingra and termed him as a murderer.

At Caxton Hall, London, a conference of Indians called to condemn the actions of Dhingra where Dhingra’s brother compares him to a stain on family, but VD Savarkar disagreed with all of them and refrained from the passing of the resolution. Eventually, Savarkar got attacked by an unknown person but was defended by MPD Acharya sitting next to him.

Madam Bhikaji Cama wrote Madan Talvar after the martyrdom of Madan Lal to honour his sacrifice for the Motherland.

It is significant to figure out that our people are busy vilifying the sacrifice of Dhingra, but people outside India applaud and term it a prime sacrifice made for the country. Some even represented him as the epitome of establishing the feeling of Independence. The life story of Madan Lal Dhingra answers several doubts inflaming in my mind that what condition leads us to be enslaved, and then reaches one conclusion that we Indians always have a Jayachandra (traitor) inside our camp.

Therefore, the invincible legacy of Madan Lal Dhingra taught us to stay connected to Dharma (duty); even the whole family stood up against you as no one is above the country and the principles of Sanatana Dharma. The spirit and adherence of this son of the soil oblige us to bow towards his pious memories. It is an eternal truth that people adopt what they gather from their surroundings, but Dhingra’s life told us to stay in favour of truth even though we face many objections in the path of candor.

Beyond the Founding Fathers: 12 Unsung Figures Who Helped Build America