Manikarnika: Freedom Apotheosis in the Indians 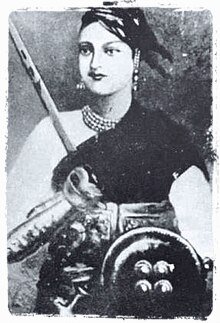 Manikarnika, also revered as “Jhansi Ki Rani” and “Lakshmi Bai”, was a Queen of the Jhansi Kingdom and an epitomic revolutionary in the Indian Independence Struggle. She fought against the devilish British Raj and became a leading figure in the Indian Independence Movement 1857. Manikarnika was a remarkable Warrior and a true stateswoman, even known as the symbol of resistance against the British Raj for Indian Patriots.

Since her childhood days, Manikarnika was very much attached to wrestling, steeplechasing, and playing adventures sports. She always remained eager to know about the state’s politics and make strategic plans. Manikarnika was well-nourished with reading and writing abilities, though considered more advanced or independent than others of the same age.

Manikarnika was born on 19th November 1828 in a Marathi Karhade family of Varanasi town. She was born to Moropant Tambe (Father) and Bhagirathi Sapre (Mother) and was even called Manu (Nickname) by her parents. She lost her mother when she was only four years of age and was later raised with her father’s love.

The Tambe family originated from Maharashtra, where Manu’s father works for the 11th Peshwa Baji Rao II of the Maratha Empire. She was dearest to Peshwa though he nicknamed her “Chabili“, which means playful. She was well trained in Sword and shooting by Tatya Tope (Freedom Fighter of Indian Independence Movement, 1857) and Nana Sahib.

Manikarnika was very fond of horsemanship though she had many horses since her lifetime, including Pavan, Sarangi and Baadal.

Marriage and Life in Jhansi:

In May 1942, when Manikarnika was only 14 years of age, she got wedded to Maharaja of Jhansi, Gangadhar Rao Newalkar. According to Marathi culture, a married woman is renamed by her new family; thus, she was renamed Lakshmi Bai (derived from Goddess Lakshmi) and became famous as Jhansi Ki Rani Lakshmi Bai.

Gangadhar Rao adopted a child known as Anand Rao, son of his cousin brother and renamed him Damodar Rao; the whole instance happened a day before he died. The adoption process took place before a British officer from East India Company. Maharaja of Jhansi Gangadhar Rao Newalkar ordered the British Officer to consider his adopted son with respect and give the throne to his widow Lakshmi Bai as guardian to the throne after his demise. After that, Damodar will succeed.

The British East India Company rejected the instructions given by Gangadhar Rao and dismissed the claims of adopted son Damodar Rao aka Anand Rao, and Manikarnika over the throne. The British East India Company assumes the territory into their reign under Governor-General Lord Dalhousie through the Doctrine of Lapse. When Manikarnika learned about it, she cried the famous phrase:

In March 1854, through the Doctrine of Lapse, the British army plans the annexation of the throne of Jhansi, whereas Manikarnika was given an annual pension of Rs. 60,000 and ordered to leave the fort by the British.

Indian Independence Movement of 1857 and Death of Rani:

The revolt of 1857 was triggered when the Indian sepoys were directed to bite greased cartridges (Made up of beef and pork) by the East India Company. The cow is believed holy among Hindu sentiments, whereas Muslims don’t prefer pork meat.

The agitations were held all over the Country, and the most significant part in organizing agitation was the Indian Independence Movement Revolutionary Mangal Panday. Mughal Emporer Bahadur Shah Zafar, Begum Hazrat Mahal, Kunwar Singh, Nahar Singh, and various other leaders also participated in the Indian Independence Movement of 1857. The movement took place at a mass level throughout the Country, which triggered the feeling of Nationalism and patriotism among Indians.

On the other hand, Manikarnika arranged the forces from the different kingdoms and her allies to fight against the British Raj. She also included women in her camp and started training them in self-defence. In the movement to achieve freedom and assemble rebellions against British Raj, she was supported by Tatya Tope and Nana Sahib.

In March 1958, Hugh Rose of Central India Field Force laid the siege to Jhansi Fort, where Manikarnika received a big blow from the British army. Due to Betrayal by someone inside the Jhansi fort, the British army attacked the fort though, Manikarnika decided to guard her land until her last breath. She fought valiantly riding Horse Baadal, carrying her son on her back, withholding swords in both hands.

The commander in chief of Manikarnika guided her escape to avenge the defeat and bloodshed. She forcibly jumped from the fort’s highest wall on horse Baadal with some of her followers. Making escape successful for Manikarnika Horse Baadal sacrificed its life while jumping from the fort’s division, around 285 metres high.

Manikarnika led the campaign actively and captured Gwalior fort, where Nana Sahib swore as the Peshwa of the Gwalior fort and Rao Sahib as Subedar.

Hugh Rose again attacked the Gwalior fort where the war began, and as a result of this Massacre made by the British army, Manikarnika relentlessly fought even after she got severely injured; the British cut down her half forehead. She went to a nearby Priest and asked him to burn her body and take Damodar away from British Raj.

Hugh Rose stated after the war:-

Therefore, Manikarnika the Rani of Jhansi fought bravely against the fanaticism and tyranny of the British Raj and even made the British acknowledge her sacrifice and love for the Country. Manikarnika symbolized herself as the true epitome of women empowerment and a Sanatani woman.

Drone attack hits US base

Afghan Family Separated During Evacuation Sees ‘No Sign’ of Reunion

Drone attack hits US base